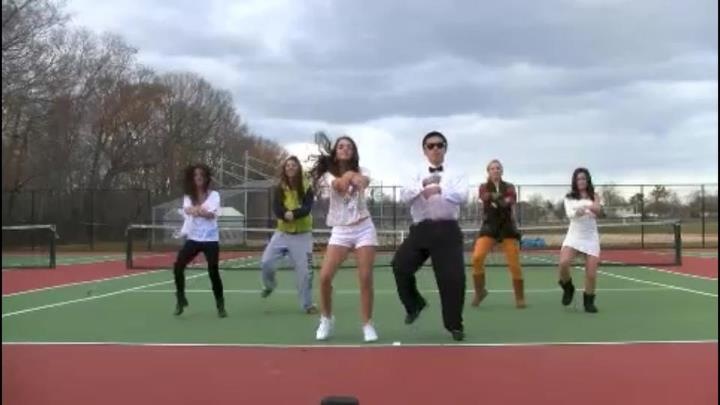 From GangNgai Style to Wantagh Poppas, the class of 2013 seniors roasted the variety show on Thursday, November 29.

Opening up the night, the viral “Gangnam Style” parody “GangNgai” Style was projected onto the screen in the auditorium and was played followed by tons of laughs and applause by the cracked-up audience. The video is now on YouTube, with a view of approximately 40,000+ views.

Following that hit act, Maggie Tigue sang a gorgeous piece “Sola, Perduta, Abhandonata” that MC Pat Lavin joked and said was “an interesting rendition of Waka Flocka,” but was obviously much better. Along with Maggie singing were seniors Samantha Balzano who sang “Love Song”, Jenna Fazio who sang a heart-felt cover of “Drops of Jupiter” alongside Ryan Reyes on Guitar, and Christina Tramantana who sang a beautiful medley and played the piano. Dynamic Duo Michael Sarlo and Michael Morelli performed “Landslide” by Fleetwood Mac and attempted to sing but got the audience to sing “Good Riddance” by Green Day. The varsity boys’ soccer team made interesting parodies of “Sherry Baby” and “Barbara Ann” replacing the names with Coral Sales, an inside joke with Ms. Stuart’s 2011-2012 9th period chemistry class made public.

Aside from all the beautiful vocals in our class, we have more varied talent. Paulina Renda played “Too Close” on the piano, grabbing the audience’s full attention. Ryan Reyes’ performances with Fazio and his solo act which included dancing and playing the piano proved to the crowd how incredibly talented he truly is. Comedian Rich Grillo made the crowd burst into laughter with his funny comments about the dean, Bill the security guard, and his girlfriend. Wantagh Poppas, a group of some of the funniest girls in the grade made fun of the notorious Facebook group Wantagh Mommas.
This night would not have been made possible if it weren’t for the senior class advisors, of course, or the well-chosen MCs Chris Bobby, Pat Lavin, Sam Magnes, Alyssa Marro, and Brendan Serrano. Throughout the show, they cracked jokes and even covered an interesting take on “We Are Never Ever Getting Back Together,”
Well-liked English teacher, Mr. Dubin, said that this has been one of the best senior variety shows he has ever seen.