“Blown Away” by Carrie Underwood 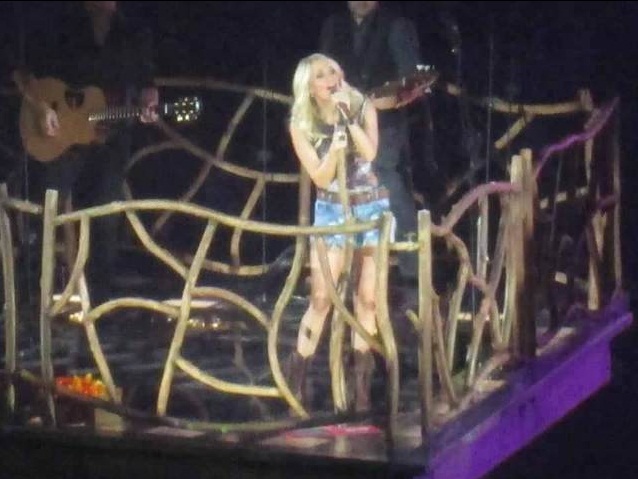 Carrie Underwood performed her Blown Away Tour at the Nassau Veterans Memorial Coliseum on November 30th, 2012. The concert was comprised of many songs from her new album, “Blown Away,” as well as songs from her previous albums.

“Blown Away” is Carrie Underwood’s fourth album. This album features many songs that have recently topped many charts. The first single was “Good Girl.” Next, the song that inspired the title of the album became her newest hit, “Blown Away.” Recently, “Two Black Cadillacs” has given Underwood her third number one from this album.

The show opened with Hunter Hayes. Although he is very young and new to the world of country music, he gave one stellar performance after another. After singing eight of his songs, including his most famous song, “Wanted,” the crowd was definitely left wanting more.

It felt like years between Hunter Hayes’ performance and when Carrie Underwood came on, but it was totally worth the wait. The concert started out with a “Wizard of Oz” type scene on the screen, leaving us in suspense for what would later be her last song. She started off with “Good Girl.” She performed hit after hit, alternating between her four albums. With each performance came a new background, which made each song feel like its own three minute movie.

Just when we thought the concert couldn’t get any better, she suspended the stage from the ceiling and sang as it rose and moved towards the back of the theatre. Suspended, she sang six songs, giving the people in the back and those high up front row seats.

The stage might have returned to ground level, but her talent level continued to reach new heights. She performed “Leave Love Alone” with Hunter Hayes. During “Remind Me,” a song usually sung with Brad Paisley, a video of Paisley was put on the screen, and the song was sung as its usual duet.

When the concert was over, she came back out for an encore and ended the night with her hit single, “Blown Away.” Behind her throughout the whole performance was a wind machine that simulated an actual tornado!

Since entering the music world after winning the fourth season of American Idol in 2005, Carrie Underwood has certainly made her mark as a country music icon. Throughout her career, she has been nominated for 174 awards, and she has won 116 of them. Some of these include Billboard Music Awards, Country Music Association Awards, Grammys, and People’s Choice Awards. In addition, for the past five years Underwood, along with Brad Paisley, has hosted the Country music Association Awards.

For most of the concert dates, Carrie Underwood performed to sold out arenas. This tour was so popular that she decided to add a second in 2013. In addition, for every ticket sold, Underwood donated one dollar to the American Red Cross. If you haven’t seen this concert yet, make sure to buy your tickets now!