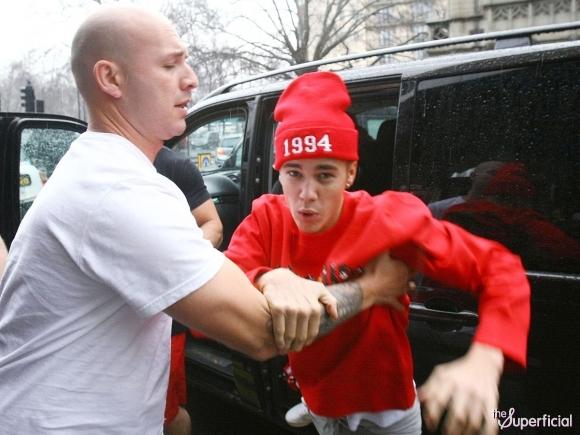 Justin Bieber’s recently “crazy” acts have been attracting the already controversial star a lot of negative attention. Experts believe that his bizarre actions are caused by “too much, too soon.” The 19 year old has been thrust into the ultimate world of famedom and it has caused him to have a serious meltdown. Thousands of people are anticipating the downfall of “Boyfriend” singer.

In past weeks, he has been seen taking off his shirts multiple times in public despite the cold weather, collapsing on stage, smoking marijuana in his car, and having a mental breakdown in front of media. His careless actions have been attracting more negative news than usual.

Critics have been comparing J.B. to an early Lindsay Lohan, causing Bieber to angrily tweet a reply, “To those comparing me to Lindsay Lohan look at her 2012 tax statements :).” Although, he quickly deleted the impulsive tweet the damage was still done. And Bieber can officially add Lohan to his continuously growing line of haters. It seems everyone has to have an input on Bieber’s recent actions. Olivia Wilde made a tweet towards Bieber frequent shirtless-ness writing, “Bieber, put your shirt on. (Unless you lost all your shirts in a fire in which case my condolences and please purchase a new shirt.)” On David Letterman Selena Gomez, Bieber’s ex-girlfriend, joked about making Bieber cry.

While Bieber’s hater list continues to grow, his fans (otherwise known as “beliebers”) remain unconditionally loyal. For every negative comment someone makes about Bieber there are thousands of 13 yr-old girls ready to tear that person apart. Bieber has perhaps the craziest fan base known to date. Without hesitation fans have been ripping apart other celebrities (including Selena Gomez, Olivia Wilde, Drake Bell, among others) and even starting the well-known “Cut4Bieber” hashtag.
No one can deny that the Biebs actions are getting out of control, the only question now is whether he will burn out like other young stars have in the past or overcome this rebellious faze. However, if the young pop star wants to stay on top he better get it together.