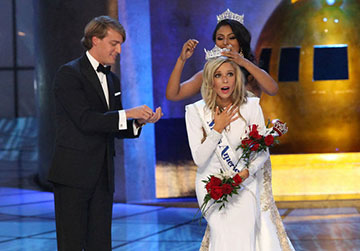 Kira Kazentev, 22 was named Miss America. Kazantev was the third contestant in a row to win from New York. This was the 88th pageant held in America. She won the judges’ hearts by her a capella rendition of the hit song “Happy” originally recorded by Pharell Williams. Along with the title of Miss America Kazentev was granted $50,000.

Before Kazentev starting competing in pageants she attended Hofstra University. She was part of a Sorority named Alpha Phi. Rumors are now spreading that while Kazentev was in college she was kicked out of the sorority. Kazentev was accused of hazing the underclassmen, freshmen and sophomores in the sorority. Hazing is very common in college and sometimes in high school. The girls feared Kasentev and her companions and eventually reported them to the University.
Kazentev’s initially responded that her past boyfriends were very abusive towards her. Some of her fans who had admired her now resent her. During the pageant, Kazentev stated that she would like to end all abuse towards girls. Looking back that seems like a very hypocrital thing to say.

Kazentev earned her crown in the beginning of September. She was recently interviewed about the allegations of abuse. Her biggest fear is that the pageant organizers would take her crown because of this scandal. One of Kazentev’s former sorority sisters Abigail Littleton, claims that these rumors about the abuse are ridiculous. Kazentev was a guest on Good Morning America and she was interviewed by news reporter, Lara Spencer, September 23. She was only on air briefly, however she denies that she abused anyone during her college years.

A similar situation happened with former Miss America winner, Vanessa Williams. In 1984, Williams was crowned Miss America. From her win she became an idol. However, soon after winning the title Williams agreed to do a nude photo shoot. She said that all those years ago she made a huge mistake. Her crown and the title were stripped from her. She was devastated at the time. Unfortunately, for a while Williams lost her newfound fame. It is now 30 years later and Williams is now an actress, known for her role in the television series “Ugly Betty.” Williams has proven that even after a bad indicent like hers, you can still be in “Show Biz.”