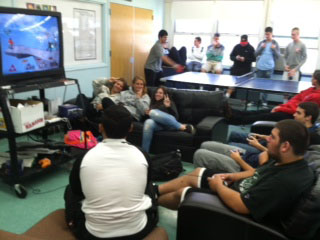 We probably all have experienced the echoing sounds of “aws” and “yeses” as well the overbearing noises of cartoon chants while passing room 150. Yet some teachers, along with a few bookworms, oppose senior study hall video games.

For those of you not aware of the infamous GameCube at Wantagh High, located in the study hall, Super Smash Brothers is the most commonly played game. It’s a four-player fighting game which debuted in 1999. Published by Nintendo, it’s rated E for everyone. All action takes place on the screen in a third person perspective, reminiscent of an “old-school” action video game. The objective of the game is quite simple; to win, knock the opponents off the platformed setting. The game time is varied, generally quick, but it’s complete chaos within those fleeting minutes. The battle is on!

“As a senior study hall teacher, it was very annoying listening to the sounds of Super Smash Brothers,” said Mr. Kravitz. “Though I enjoyed all other aspects of running senior Study Hall, especially ping pong (Mr. Kravitz was last year’s overall school ping pong champ), I think my mental health is improving from not hearing that game played every day at top volume.”

“Senior Study hall is supposed to be for fun,” said Morgan Sullivan, a senior at Wantagh High School. “If you want quiet, go to the library.”

Shockingly, video games are beneficial for the human brain. Proven by American Psychological Association (APA), the psychologists on this study focused on topics such as motivational, cognitive, emotional and social effects. A study by the NPD Group, a marketing research company, shows 91% of children between two and seventeen play video games.
You might be asking yourself, “How in the world are video games positive towards your education?”

Teachers, you might want to listen. According to the APA study, these video games are proven to enhance three dimensional skills just as well as the school academics do. Adding Super Smash Brothers to our daily school schedule contrasts with the common 2-D electronics we stare at throughout the day like cellphones, smart boards and computers. Another surprising fact, simple video games, such as Super Smash Brothers, can increase a child’s skills of problem solving along with creativity. As more studies were made, the discovery of a child’s tolerance was greatly affected in a positive way. In today’s modern world, not receiving what you want may be difficult for some children to deal with. Being defeated in a fictionalized system, children learn to develop emotional resilience, which is transferred into reality.

Most recently, schools are redesigning their classrooms and incorporating video games to develop practical minds of the next generation.

While a great range of Wantagh High School students may be irritated by the privileges we seniors share, our entitlement towards the magical GameCube can be of great influence. With SAT’s, college admissions and C-L classes, this video game not only takes our minds off the dreaded thought of tests but is helping our brains develop at the same time.

“I really enjoy playing the GameCube,” said Melissa Horn, a Wantagh High School senior. “I think it’s a great way to interact with other students that you wouldn’t normally talk to.”