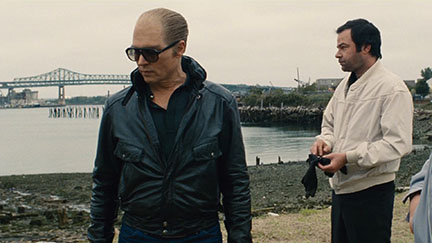 The film Black Mass, which premiered on September 18, has received critical appraises from many reviewers and received a 76% positive review on Rotten Tomatoes. It has been called one of Johnny Depp’s best performances. Does the movie break new ground in the crime movie genre or does it follow the same generic undertone of mob movies since the 80’s?

The movie has an oddly abundant amount of great actors, similar to The Departed. The cast Johnny Depp as “Whitey Bulger”, Benedict Cumberbatch as “William Bulger,” Kevin Bacon as “Charles McGuire,” and Dakota Johnson as “Lindsey Cyr.” These actors fit perfectly into their roles. The film goes over how the Irish mob boss Whitey Bulger started to use the FBI to his advantage like many other people throughout the film.

There are many reasons this film is receiving great acclaim. The acting from Johnny Depp as Whitey Bulger is hauntingly dark recreation of the real life Kingpin. He has played a similar role as an informant in the Italian mob in Donnie Brasco but as a low ranking enforcer. Here he shows a very dark and morbid approach to the character, with psychopathic tendencies and it’s clearly shown throughout via his actions. A large chunk of the movie is about Whitey Bulger thriving by utilizing the FBI while they receive little to nothing of information. The film shows his manipulation skills and how he uses everyone possible throughout. The film also choses to not romanticize organized crime like many other movies of the same genre. They decide story wise not to do the generic “Crime doesn’t pay.” Luckily the movie does some nice twists and turns (if one did not know about the Irish mob led by “Whitey”).

The cinematography deserves a heavy mention since it places itself in a higher echelon. Keeping shots and angles even if very common in other films has its place and makes the angle feel less dull. The movie is kept with no real vibrancy, dim and dark. The movie throughout almost every scene feels almost completely stoic in every scene, to the point that the club scene felt foreign and lonesome. Rarely is there strong adrenaline or any positive emotion found in this film. The film is shot with little amount of bright images or shots found. The film feels like there is an abundance of darkness. Overall very beautifully shot with an appreciation for reduction of artificial or natural light.

The only abundant issue that started to feel stale and dull like week old bread was showing Bulger killing people that talked, or “rats/snitches.” About roughly 1/4th of the film is about him talking, killing, or worrying about rats. He kills off several people even if he suspects that they told the authorities. After the first two times one can easily see it coming and realize it’s rather repetitive, in a way it was necessary to show that he was very skeptical about his own crew but honestly they could of just mentioned what they did instead of have whole scenes dedicated to a single point. It doesn’t kill the movies feeling and it isn’t truly a major negative issue but it seems like a glaring issue.

Overall the film changes up the “good feeling” romanticized mob, bringing a truth about how dark and cruel they are in truth. The film reminds many that the mob isn’t always about helping but more of a dangerous business that in this case acts above the law. It’s a fresh feel on the genre and I highly recommend watching this film when possible.