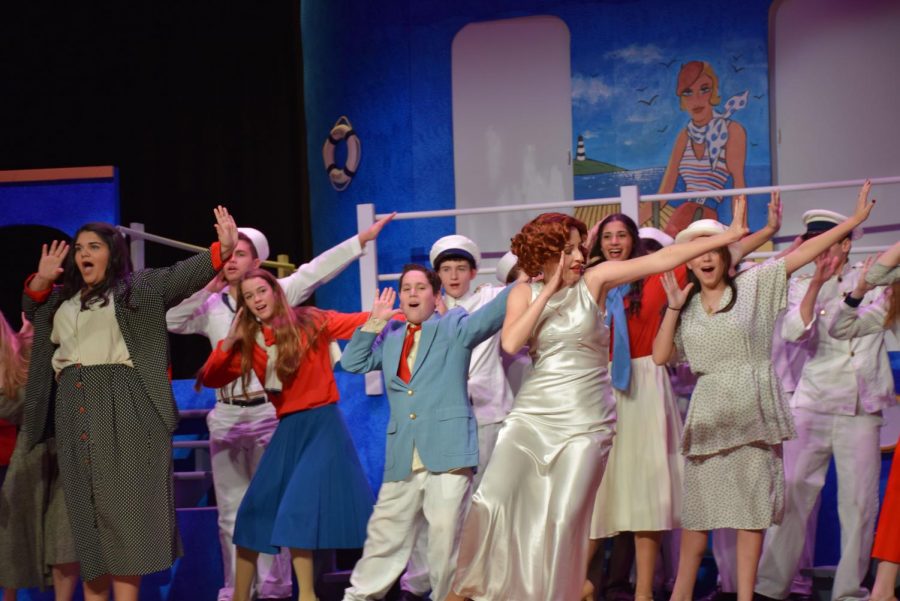 One of the terrific numbers from "Anything Goes"

The Wantagh Theatre Department, led by Mrs. Naughton, performed a vibrant rendition of the 1930’s musical “Anything Goes.” The actors took the stage from December 6-9.

I’ve noticed that this musical had a lot more choreography than other school plays I’ve seen. Seniors played the leads, with Lindsey Whiteman as Reno Sweeny, Billy Devito as Evelyn Oakley, Andrew Brunjes as Billy, Gabrielle Scibelli as Hope, and Sam Walsh as Bonnie.

Lindsey is so talented, and she keeps getting better each year. I don’t know how she sings and dances like a pro simultaneously. Billy did a superb job sustaining his humorous British accent. Sophomore Carlo Tobia, who played Moonface, made me believe that he was truly a crazy thief. He was amazing. Pat Daly did a phenomenal job playing the old and blind boss Elisha. Andrew, Gabrielle, Billy, and Pat all have nice voices.

I also got the chance to go with the cast to the Wantagh elementary schools to help out with the tour play. Billy organized the tour play this year. The cast performed “The Heaven Hop”, “Bon Voyage”, ”Blow Gabriel Blow”, and more famous numbers from the musical.

I’m in Mrs. Naughton’s drama class, and I’ve become close with all of the students involved in “Anything Goes”. The cast has such an impressive work ethic. The show was so enjoyable.