Travis Scott Puts on Amazing Performance at The Garden 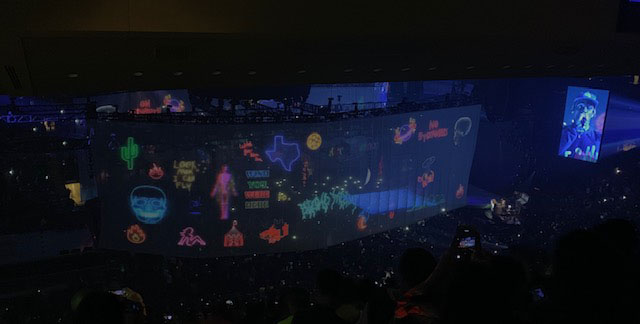 Astroworld sold out Madison Square Garden, November 27 and 28.  Travis Scott came into New York City and no one doubted the amazing performance he was going to put on.  The famous Travis Scott with over 13 million Instagram followers keeps becoming an even bigger celebrity than he was before.

The famous album, Astroworld, was named after a closed amusement park in his hometown, Houston, Texas.  In the description of his album on Apple music, it is shown to be the most personal lyrics built into these songs, that he has ever had.  All 17 songs have a different feeling or meaning. Astroworld includes the song Sicko mode which on the Billboard hot 100 list for 16 weeks. Sicko Mode features Drake, who brought Travis Scott to many of his concerts when he performed at the Garden. Everyone was hoping for an appearance from Drake at Travis’s concert, but unfortunately he didn’t come.

Madison Square Garden held an amazing concert with 5 artists. Not only did Travis perform but Sheck Wes, Trippie Redd and Gunna all opened for him and special guest Kendrick Lamar came out during their famous song “Goosebumps.” Kylie Jenner also made an appearance. She and Travis  jumped onto the roller coaster that Madison Square Garden installed and they rode it as he sang his song “Can’t Say.”

Travis sold a lot of merchandise at his concerts from sweatshirts to T-shirts. Kylie Jenner sold an exclusive lip kit from Kylie Cosmetics, which you can only purchase at the concert.  The lip kit was designed specially for the Astroworld tour including 3 different liquid lipsticks, many people were excited about this item especially because it was $35. Individual lipsticks from Kylie Cosmetics are priced at around $17 each.  Travis also had merchandise made just for the concert in New York with Madison Square Garden added on the clothes.

Madison Square Garden is an amazing venue for concerts. Wherever you sit there is a good view.  Tickets ranged from $70 to $1,000. I had the $70 tickets but it was worth it as Travis and 4 other artists performed.

I had an amazing time watching all the different artists perform.  The roller coaster, merchandise, the large blow ups of astronauts and the gold head of Travis, which is shown of his album cover, and more above-and-beyond extras, definitely made the concert one to remember.  Also, taking the train to Penn Station and then walking a few minutes up into the Garden was so easy. Travis will continue his tour until the end of the year, bringing Kylie and their baby, Stormi along of course. He has definitely made an impact with his music and the performance he put on.