The Show Goes On: Broadway’s Return 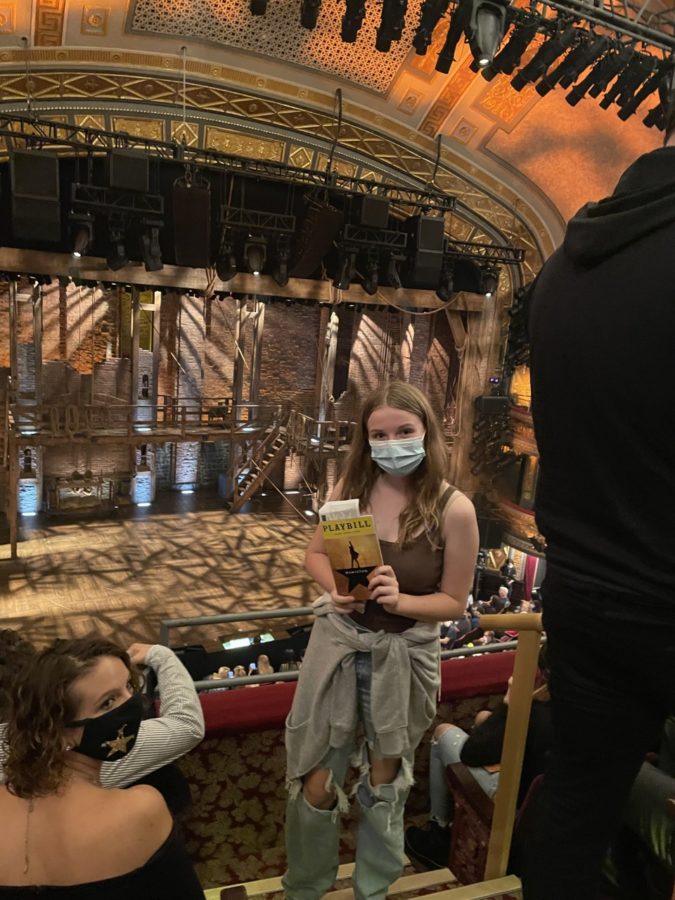 Madelyn Hartmann was lucky enough to see the lights come back to Broadway.

“Look at where you are. Look at where you started.” This line from Lin Manuel Miranda’s Hamilton encapsulates the feeling of Broadway’s reopening after 19 months. We started 2021 off grimly with little hope of the world reopening any time soon, and only a few months later, life is beginning to return to normal.

On September 14th, Hamilton, arguably the most famous show currently on Broadway, reopened. I was fortunate enough to be a member of the audience for this once in a lifetime performance.

All around the city, the usual smell of sewage was replaced with the scent of freshly printed playbills waiting to be shuffled through. It seemed as though every person seeing the show was a celebrity with the amount of sparkling dresses and news anchors crowding the theater. Although the line for the Richard Rogers took quite a while, I am happy to say it was completely worth the wait.

When my mother and I were eventually shown to our seats, the simple sight of the stage was enough to awaken butterflies in my stomach. As the theater lights dimmed, audience members were ready to be greeted by the large ensemble, yet only one man walked out: Lin Manuel Miranda. The house erupted with applause as the original Alexander Hamilton, Lin Manuel Miranda, was center stage with all lights on him.

His voice matched that of the cast recording which enjoyers have listened to so many times only hoping to hear it in person. Lin Manuel Miranda said a speech that should have taken about five minutes, but lasted nearly 10 because of the interruptions of applause.

When he eventually left the stage to take his seat in the audience, everyone was on the edge of their seats waiting for the performance to begin. In the blink of an eye dark figures entered the stage as a familiar dun dununun dun dun erupted from the pit.

Throughout the show the energy exuded from the actors was completely matched by that of the audience. An especially notable performance was by Krystal Joy Brown, who played the character of Eliza Hamilton. She amazed audiences in her solo numbers, especially “Burn,” in which she portrayed such strong emotions that it felt as though her pain was also ours. The large dance numbers and shining lights filled the hole in all Broadway lovers’ hearts since the shutdown.

When the final bow was made and the audience was beginning to be ushered out of the theater, there was an indescribable feeling that was left in my heart. It felt as though a thirst that left my throat dry had finally been quenched by some water, and this seemed to be a common feeling amongst people in the city that day.

Since that day, many of my friends have taken a trip to the city to see one of the newly reopened Broadway shows and described their experience feeling the same. COVID has shown the resilience and strength that Broadway has. And as it is said in the industry, the show must go on, and that is exactly what will happen.