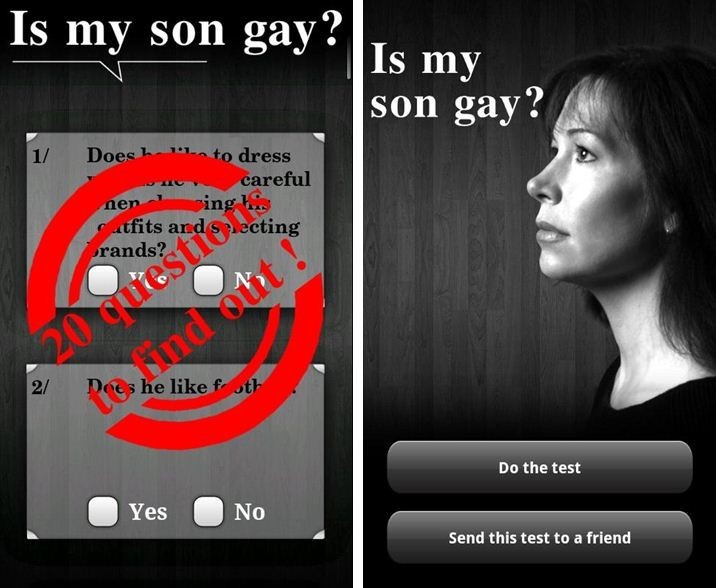 Today, everyone seems to have a smart phone. Among the most common are iphones, blackberrys, and droids. Everyone knows their favorite apps, but what about the ones that just seem plain ridiculous?

Android just recently released an app titled, “Is my son gay?” which many people find offensive. The app consists of 20 questions that would supposedly determine your son’s sexuality. Questions such as: “Does he like diva singers?”, “Does he like football?”, “Does he like to dress up nicely?” “Does he pay close attention to his outfits and brand names?”, are listed on the app.

Not only are these questions bigoted and stereotypical, they are very hurtful to people of all sexual orientations. If someone doesn’t like football does that make them automatically gay? What type of person would come up with such bogus accusations? Another question to be asked is why would a parent trust an android app to tell them more about their son?

The creators of the app responded to the hate by coming out with a statement:
“This app was conceived with a playful approach. It is not based at all on scientific research… Through humor, “Is My Son Gay?” and the forthcoming novel have the sole objective of toning down/improving the situation and helping mothers to accept their sons’ homosexuality.”

In no way does this app help mothers accept their sons’ homosexuality. If anything it makes them uncomfortable. Homosexuality has been approached by several different tactics recently. With an app like this we are not heading towards acceptance in any way, shape, or form.