What’s the Deal with Frozen Yogurt? 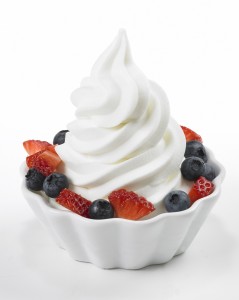 Is frozen yogurt really healthier than ice cream? If so, how much healthier? I love ice cream, but keep seeing frozen yogurt places popping up. Many of my friends have told me it tastes the same as ice cream. So, is there a difference between frozen yogurt and ice cream?

Yogurt is very beneficial to your health. Some benefits are lost when you make it into frozen yogurt. In frozen yogurt sugar is added, just like ice cream to sweeten it. Yogurt is healthy because it has living bacteria in it. Don’t worry– these are beneficial bacteria that assist the body. Yogurt and frozen yogurt both contain certain enzymes that break down dairy. Frozen yogurt only has a third of the amount of protein in regular yogurt. Frozen yogurt isn’t necessarily less calories and fat than ice cream. That’s what many people think. You can buy fat-free frozen yogurts, but they contain more sugar, making it less healthy. Another healthy part of frozen yogurt is the fact it uses yogurt not cream.

Both desserts are made in an ice cream maker. Frozen yogurt, because of its structure, is able to stay frozen longer than ice cream. If you are lactose intolerant you will be able to eat frozen yogurt because of the enzymes. It’s a good alternative for ice cream to those who can’t eat it.

Even though frozen yogurt shops are opening up everywhere, I would eat the one you think is better, there isn’t much of a difference. Frozen yogurt and ice cream are quite similar. Both frozen treats have protein, calcium, and minerals that are good for you. If you’re worried about your health just remember everything is good in moderation.