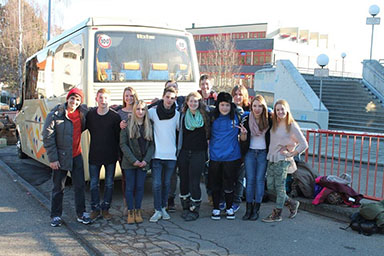 If you’re a foreign language student, chances are you’ve had to write about a host family. I was lucky enough to become a part of this exchange that I have written about so many times before. In February, I lived for several days with my host, Hannah Seiband, a student from Bopfingen, Germany. Little did I know that six months later I would become the host for two weeks.

This exchange took place with the students from a high school in Oberdorf, Germany.

As a group of six American students, we traveled to Germany to live with five different host families. Although a toddler in this country knew more German than the six of us combined, we were still able to converse with the locals. Nearly every German knew English as they’d learned it from a young age of 7. We learned about their culture, but more importantly, we learned about them.

Our close connection all began with an emotional trip to Dachau. Even though these students had never even met someone who was Jewish, they understood the wrongdoings by the Nazi community and, in a sense, they felt ashamed. We were all able to bond through our realization of how lucky we all are to live in a society unlike that of the Nazi era.

As a host family, it’s basically like adopting another child. It was almost like having another sibling; there’s always someone to gossip with, go places with and fight over bathroom space.
Each time we visited NYC, the Germans were stunned by what they saw. Never had they ever seen something quite as big as this city. In a sense, the Americans found it humorous as to how thrilled these students were to see NYC considering how commonplace it was for us to be there.

Through our experiences playing kegel (German bowling), eating schnitzel, and, as begged for by the Germans, laser tagging we became more like a family. All of us are in contact every day in hopes of possibly seeing each other again soon.