The Explosion of Autism in America 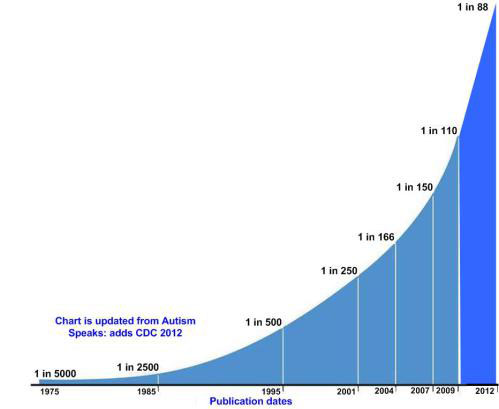 The widespread disorder named autism has rapidly expanded, which perplexes medical professionals and the masses alike. In the 1970s and 1980s, about one out of every 2,000 children had autism. Presently, the Center for Disease Control (CDC) estimates that one in 150 8-year-olds in the U.S. has an autism spectrum disorder, or ASD. This alarming increase in diagnosis is not only limited to autism, but is also relevant to other brain disorders and disabilities such as Asperger’s syndrome.

What could this mean? Well, the blame has been pointed at a number of factors by the public, such as vaccines, genetically modified ingredients in processed foods (GMOs), or even the chemicals sprayed from airplanes. As ridiculous or far-fetched that these claims may sound, it still doesn’t disclose the fact that the rise of autism is considered a medical puzzle to even the greatest of medical professionals.

Parental concerns persist as vaccination rates continue to soar, leading to the claim that vaccinations may cause autism. There have been multiple cases of which such severe instances have occurred—causing people to demonize the act of receiving vaccinations as a whole. According to the Oxford Journal “three specific hypotheses have been proposed,” one being that the trio of the measles-mumps-rubella vaccine causes autism by attacking and destroying the intestinal lining—a ridged lining that allows the entrance of encephalopathic proteins into the body, a significant function. To add on, thimerosal is found in almost an innumerable number of vaccines, which is an ethyl mercury-containing preservative in vaccines, and is highly poisonous to the central nervous system.

The third hypothesis expressed is that the distribution of numerous vaccines at the same time overwhelms or weakens the immune system. This may prove why after a baby is born and given simultaneous shots at the same time, some will start to show signs that eventually lead to an official diagnosis of autism. The main one given at birth is Hepatitis B because, as we all know, newborns are typically promiscuous IV drug users. Jokes aside, this vaccination is probably completely useless and ineffective because Hepatitis B is almost always transmitted through unprotected sex or needle sharing. Some claim that this is the shot that causes autism with susceptible children, as does the MMR. But why are these vaccinations so strictly pushed upon us, without us having a say in whether we wish to push them onto our children or not?
But it would be pretty narrow-minded to point all the blame at vaccines. How could we be certain that this is the cause for the numerous reported cases of autism? It is well-known that vaccinations were created for preventing threatening illnesses by making weak attacks on our immune system. Vaccines were the main cause for the eradication of smallpox, and nearly eradicated other diseases such as polio—so why should we doubt them? Well, have you ever heard of a holistic doctor?

Holistic doctors are “alternative” physicians who combine modern, Western scientific treatment with unconventional medicine or complementary treatments. These can include chiropractic, acupuncture or massage. They typically offer options other than standard vaccines and prescription drugs like herbal remedies that have claimed to cure severe illnesses. These are doctors that are not typically heard of or heavily broadcasted as much as the stereotypical, traditional physician; they go against the conformity of standard medicine and take a much more organic approach. Why is this talk of holistic doctors related to the focus of autism? It is said that these holistic doctors have found autism-causing carcinogens in vaccines.
As far as the GMOs claim goes—we should already be aware of the dangers of artificially manufactured ingredients and insecticides. In fact, there has been such a demand for popular distributors (General Mills for instance) to take out these harmful ingredients from their products that companies have been renovating their products and taking out ingredients like corn starch, high fructose corn syrup (the leading cause of obesity in America), high maltose corn syrup, corn syrup—along with dyes: red #40, yellow #5, and blue #2. Along with obesity GMOs can cause numerous health problems, which may explain why some point to autism as one of them. Regardless, it is best to stick to fresh, raw foods or to go organic.

In reference to the graph above, autism cases have been rapidly increasing year by year. Although this graph is particularly not up-to-date it is an official statistic that estimates that there is a significant upward trend that continues to rise. For more information I recommend visiting autismspeaks.org for insightful news and features that expose this prevalent matter. Overall, the key theme is inevitable — it’s time to be aware about this increasingly dangerous situation; it’s time to listen.