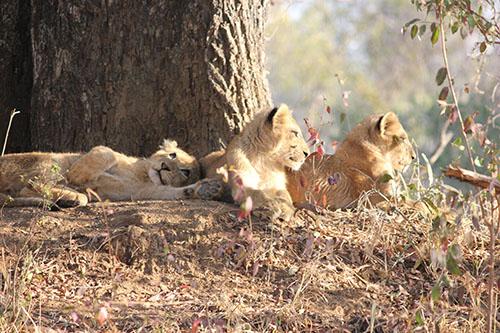 Ordinary vacation spots offer beaches, warm pools with hot Jacuzzis, golf. Relaxing yes, but that routine gets old. Would you rather vacation somewhere new and exciting? What if you could go to Africa?

At first, the notion may seem daunting and strange. Most families refrain from straying from the normal vacation spots, and the veil of rumors about diseases and wild animals that surrounds Africa is typically enough to steer tourists away from the continent. Africa, while exotic and thrilling, can be dangerous, but with common sense a tourist can be safe.

Two Wantagh teachers, Mr. Manolakos from the middle school and The Warrior’s own Mr. Kravitz, journeyed to South Africa over this past summer (the African winter).

Mr. Manolakos, who spread his foreign expedition to Durban and Kwazula Natala among other African towns, made the safety of his family during their vacation his utmost concern. Contrary to popular belief, a voyaging American will be free from harm in Africa, if equipped with common sense. Mr. Manolakos said that all that was needed to provide security on his trip were standard cautionary procedures. “It’s not like there are any wild animals roaming the streets.” He joked. “It’s nothing a New Yorker can’t handle.” Mr. Manolakos strongly recommends taking a holiday in Africa. “It’s a great experience, and it’s not your typical vacation,” he said.

Mr. Kravitz, on the other hand, did have wild animals roaming around in Mala Mala, a safari camp deep in the African bush. “You weren’t allowed out of your room at night without an escort,” said Mr. Kravitz, who was in Africa to celebrate his 25th wedding anniversary with his wife. “One morning we saw a leopard a few hundred yards away from where we were eating breakfast and there was a scary experience with a male nyala (a 300-pound, sharp-horned type of antelope), eating flowers in front of the door to our room.” Mr. Kravitz also journeyed to Cape Town and Zambia. It was safe in the day, he said, but you had to exercise caution at night.

In Cape Town, Mr. Kravitz said there were families from many different countries. He described Cape Town as a great city of steep mountains set up against the cold waters of the Atlantic and Indian Oceans. On a safari, he rode around in open jeeps right next to lions and leopards. His safari experience was exhilarating, he said, and safe. However, there was the threat of an elephant charge and there were hippos and large crocodiles. “I learned that the crocodile is the only animal that hunts humans and that hippos kill more people each year than any other animal in Africa,” said Mr. Kravitz.

South Africa can be a safe and exciting place to travel to, though the safaris require caution. It’s not the best place for the faint of heart, but if you ever feel the pull of wanderlust tugging at you, consider Africa as the setting of your next adventure.