A Hero of Hope 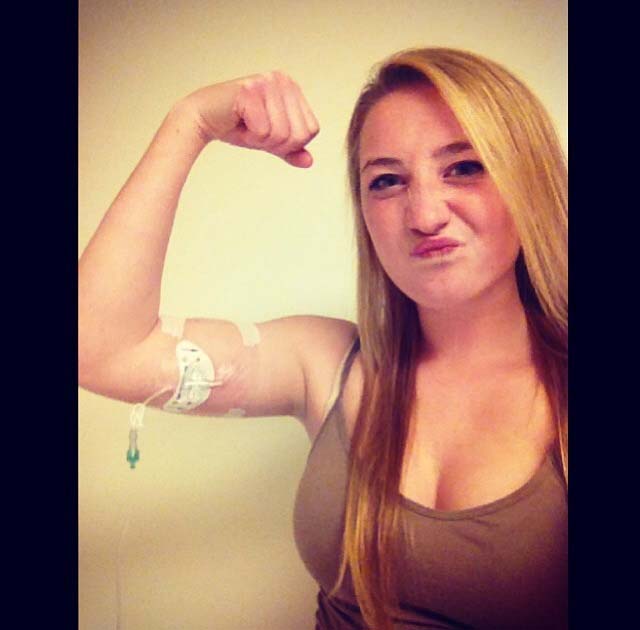 Cystic Fibrosis is a hereditary disorder. It’s caused by a genetic defect that affects the functioning of cells leading to thick, sticky mucous that clogs the lungs and leads to life-threatening lung infections. It also obstructs the pancreas which stops natural enzymes from helping the body break down and absorb food. More than 500 different types of cystic fibrosis have been discovered each with different complications and obstacles. This rare malady is carried by seemingly healthy people. My 19-year-old sister Kate has Cystic Fibrosis.

She is a 2012 Wantagh graduate in her sophomore year at the University of Delaware. Cystic Fibrosis stops some patients from participating in physical activity or sports teams. Even though Kate has a condition affecting many different parts of her, she makes time for everything.

“It is hard to fit everything I need to do in my schedule, including taking my medicines,” said Kate Sneddon. “ It is very difficult balancing sports, school, and cystic fibrosis.”

In 2010, Kate received the Hero of Hope award given by the Cystic Fibrosis Foundation along with five other people that year. She was given that award for being a well-rounded person participating in multiple varsity sports, school clubs, showcasing artwork regionally, and being a part of different honors programs…with Cystic Fibrosis.

My sister has been a role model for me throughout our lives. She once said “CF has given me perspective. I’m not glad that I have CF, but it’s helped me to be glad for what I have versus wanting what I don’t have.”

I look up to Kate so much. She is such a strong person and even though she has her struggles. She takes the time to help me with my minor problems and is the best older sister I could ask for.

Every day, Kate has to work her plans around treatments and medications. Kate got her 6th Picc line, on October 25. This is a small, flexible tube that is inserted into a vein and pushed through until it ends in vein in the chest area near the heart. This feeds medicine directly into your blood stream for a quicker effect. Although it is helping Kate in one way, it affects her negatively as well. The antibiotics used to fight the bacteria causes her energy to drain much faster. It is a lot harder to get her work done on top of medicine and crew.

Many Cystic Fibrosis patients are no stranger to this medical fix. Even with being sick and having a Picc line, she still attends rowing meets, practices, and class. The antibiotics used to fight the bacteria causes her energy to drain much faster. It is a lot harder to get her work done on top of medicine and crew. If she somehow gets open time in her schedule, it is used for taking medicines. There is never a time when being a regular 19-year-old girl is an option for Kate, although she is normal, she has all these additional problems floating around her. Even so, I aspire to be half the person she is.

Since we were young, Kate has always thrived in everything her condition should make her weak in. She puts hard work and dedication into everything she does.

“Going through college with CF has forced me to prioritize,” said Kate. “Getting super sick made me have to care about my health more than other things going on in my life, which I never really had to do before. It makes you really conscious every day with something really difficult that not many other people do, and in order to be successful you have to put all your efforts into everything all the time.”

Kate is my hero because she fights her own fight, and takes care of what needs to be done for her benefit. There is no slack in her world; there is a constant pulling and tugging between the illness and everything else. That’s what makes her great…the way she deals with all the struggles she faces is phenomenal. She is everything I could ever ask for out of a sister and a role model.