Aviles on the Mend After Horrific Bike Crash 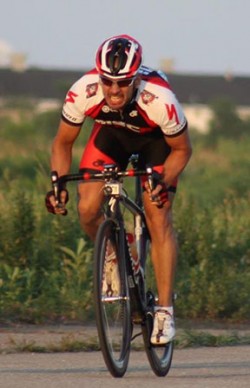 Bikes tangle. Mr. Aviles squeezes his brakes. His front wheel hooks with the mass of bikes and he catapults over his handle bars. He smacks shoulder-first into the asphalt. Mr. Aviles has been cycling for 14 years and has been involved in competitive cycling for seven years. The Wantagh High School band director had never been scratched or bruised until the accident a few months ago. “It hurt a lot,” said Aviles. This race, with a reputation for being non-aggressive, had taken a turn for the worst.

After the accident Mr. Aviles discovered that he had split and dislocated his arm. He was hospitalized the next day and went into surgery the following morning. The vertical split in the arm made the surgery a little more complicated and the doctors resorted to inserting a titanium plate and screws in order to hold the arm together.

After the surgery Mr. Aviles was not allowed to use his right arm at all, which ultimately led to muscle atrophy in his shoulder as well as his back. Finally, when he was able to use his arm again, things were not easy.

“Simple things like brushing my teeth, eating and putting a shirt on were impossible,” said Mr. Aviles. He was unable to go to work for two months and now still has another five months of physical therapy. In his absence he was still able to contact substitute band director, Mr. Devries, and band director, Mrs. Dragovich, to check on how the band was doing.

While absent, Mr. Aviles had to miss a couple of football games directing the band. “It was tough not being around for marching season since I design their field show every year,” said Mr. Aviles. Not being in class until November also made it difficult to get to know all of the freshmen.

“It took a couple of days to acclimate” said Mr. Aviles. Fortunately, he was able to go to the Newsday Marching Band Festival at Hofstra University that the band performs in each year. Mr. Aviles will also be able to go to Tortola (the Virgin Islands) with Mrs. Dragovich and the combined band in late February now that he’s feeling better.

The trip is an excellent way for the three high school bands to travel and preform together while simultaneously experiencing a different culture. The trip will include several performances along with site seeing and time on the beach.

The band has gone on many other great trips in the past including visits to Disney World, Puerto Rico and Spain. The bands have traveled to Tortola in the past with Mrs. Dragovich and they are expecting another great experience. The WHS band has won multiple awards on their trips for their high level of performance and have also performed in local festivals on non-trip years such as NYSSMA Majors where they have received outstanding ratings.

Mr. Aviles has worked hard with Wantagh’s music program over the years and his absence was definitely noted. Although it will be a few months until his physical condition is back at 100 percent, it is excellent having him back in time for the trip and to finish out another great year for the band.