The W.H.S. Band Travels to Paradise 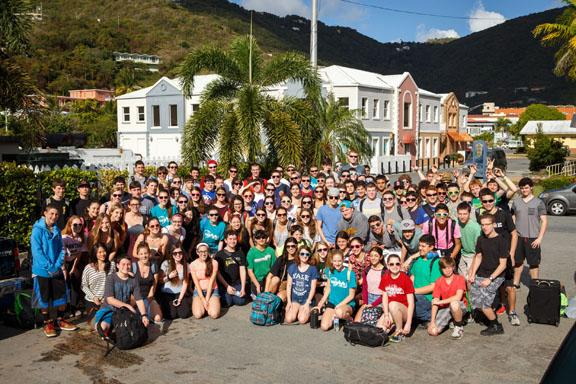 The ideal journey into paradise does not generally begin at 4:30 in the morning with a -5 degree wind chill. But the Wantagh High School band’s voyage into the Virgin Islands did. The band students, I among them, flocked to the high school wearing heavy coats and sweatpants, while dragging luggage filled with T-shirts, shorts, and swim suits. The hectic months of preparation were over; we were ready for paradise. We were ready for Tortola.

This began over ten years ago in 2004, when Mrs. Dragovich led the high school band to Tortola for the first time. There, the band played alongside the band members of the British Virgin Islands High School (now known as the Elmore Stoutt High School.) Now, we were going to return. “The idea of a reunion concert was too cool to pass up,” Mrs. Dragovich said, “Also, I wanted to go again before my looming retirement.”

The band, to be led by Mr. Aviles and Mrs. Dragovich, planned on making this reunion concert one of the best concerts we’ve ever played. For months, we painstakingly reviewed and reviewed our music, including practicing in two mass band rehearsals, where the concert band, symphonic band, and wind ensemble stuffed themselves into the band room for 3 hours. Nobody complained. If I’m being honest, I actually enjoyed them.

The eager band students assembled in front of their planes’ gates, on February 28, at JFK International Airport. We were split into two flights. The plan was simple: arrive at the St. Thomas International Airport in the U.S. Virgin Islands, tour that island, eat dinner, and get on the ferry to Tortola. And one of the flights did exactly that. The other, however, faced some unexpected delays. Unfortunately, that flight arrived to St. Thomas particularly late, while the students on the other flight toured St. Thomas. However, that did not stop us from enjoying ourselves.

It’s very difficult to describe the feeling you get when you walk off a plane into one of the most beautiful places on Earth. It’s easy to visualize the bright blue skies, the clear and deep ocean, as well as vibrant colors throughout the island. It’s much less simple to attempt to put into words the exact feeling one gets when they are actually, physically there. I had never seen such a sight before or been to such a place before. I believe only those who have experienced this can understand what I mean. We instantly forgot about our delayed flight and focused on the present, and the future. We were going to be in this region for the next three days.

We traveled to Tortola that night via ferry, and were up nice and early the next morning for a rehearsal in our hotel. Soon after the rehearsal, we took a beautiful tour of the island, and then traveled to the beach for a fantastic few hours in the water. That night, we returned to the hotel for a dance party in the hotel (unofficially labeled “Band Prom”.)

The next morning, the band hiked Mount Sage, the highest peak on the island, led by a number of very interesting and informed tour guides. After trekking up and down the mountain (and spending quite a long time in the gift shop at the end of it) we made our way back to the hotel to prepare for the reason we traveled to Tortola: the concert.

The band arrived at Sir Rupert Briercliffe Hall, where we were to perform in front of hundreds of the island’s people, both extremely excited and extremely focused. The rehearsal before the concert would also be the first opportunity for us to interact with the band students from the island.

At 6 o’clock, the Elmore Stoutt High School Band took the stage and delivered a fantastic performance. Then, it was Wantagh’s turn.

The pieces the band performed included a percussion-exclusive piece written by our own Mr. Aviles titled “Jars” (which involved only the use of jars, pencils, and the percussionists’ hands as instruments), Robert W. Smith’s “Northwoods: Of Might and Mettle”, Jay Dawson’s arrangement of “El Cumbanchero”, Ralph Ford’s “Con Brio March”, Michael Sweeney’s “Earthdance”, Erik Morales’ “Da Vinci Sketches”, and finally James Swearingen’s “Lead On, O King Eternal”, which the Wantagh band played alongside the Elmore Stoutt band.

The concert was met with universal appraise by everybody in the hall. The audience was on their feet, calling for more. Soon after the concert, we were driven to an arcade with a lot of games and a lot of food, sponsored by the Rotary Club of Tortola. It was here that we were able to talk to the band students from the island, and make friends with them. “Meeting with the kids from the island really opened our eyes to other cultures,” senior flutist and drum major Alyssa Kelly said, “Even though we live in such different places, we were still similar in multiple ways.”

And the next morning, that was it. We had to leave this beautiful place and return home, much to every student’s dismay. Spending time on that island with the rest of the band seemed to have changed everybody on some level. “If you take the band away from their everyday lives, they become open to new experiences, to being able to focus at a higher level, and to become ‘professional’ performers,” Mrs. Dragovich said, “The band is a family that thrives on spending quality time together.”

I, myself, could not have asked for a better experience for my senior year. #TurnUpTortola!