Treats on the Way Out – Popular Economics Teacher Bogatz Retires 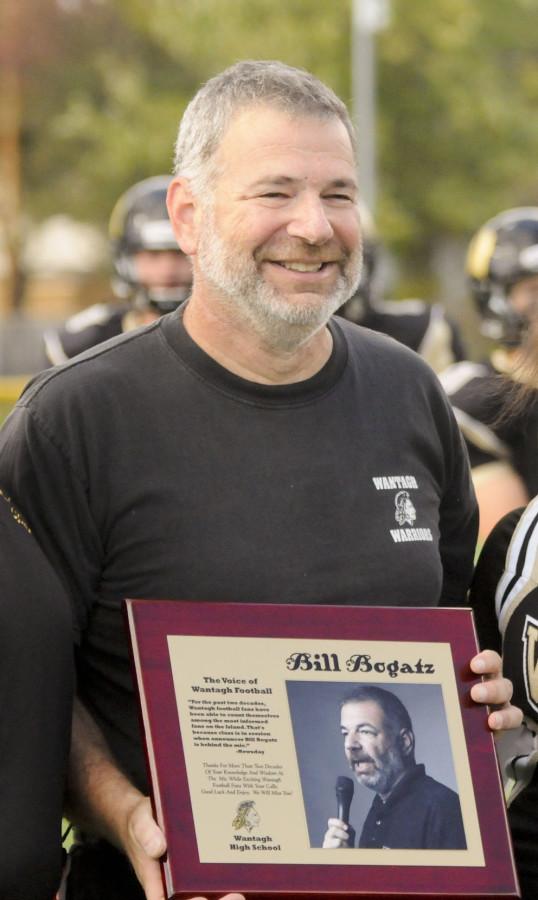 As Wantagh plans to say farewell to the class of 2015, as students throw their caps in the air on June 25, the Wantagh school district also prepares to graduate one of its most beloved teachers, Mr. Bogatz, who announced his retirement earlier this year.
“I’m 63 years old with 35 years of teaching and it’s time,” says Bogatz.
Mr. Bogatz began teaching in Wantagh in 1974. From 1978 to 1988 he taught in different districts and worked at various jobs including for Amtrak. Bogatz returned to Wantagh in 1988 and has been in the same exact room, 140, right by the tennis courts, for all of those 27 years. Anyone who has had Mr. Bogatz has come to know his unique teaching techniques; checks and minuses for class participation and only blue pen allowed. But Mr. Bogatz was more than just an excellent teacher here at Wantagh, his service went far beyond the classroom.
In 1990, Bogatz took over as the announcer at the football and basketball games and since then has become the voice of Wantagh. Not only does he highlight key plays and introduce the starting lineup, but he also always has some kind of sports trivia to share whether it is about Wantagh, college sports or professional leagues. His range of knowledge is incredible. Even though Bogatz doesn’t announce all the sports at Wantagh, he makes time to support them all, whether he is bringing oranges to the athletes before the big game, or just coming as a spectator. And if your name was in the paper, it is likely that he will cut out the article and highlight it. Mr. Bogatz always makes the students at Wantagh feel good about themselves.
After retiring Bogatz hopes to continue to announce here at Wantagh, as well as advise the academic team which he took over in 1995. He would also like to teach part time. Wantagh, he says, would be his first choice.
In his 35 years at Wantagh, Mr. Bogatz never took a sick day. He would take an occassional personal day for a meeting, but his sick day bank has 396 days in it. Or as Bogatz sees it, he’s worked 5,941 days without a sick day.
It is likely you’d see him here on the weekends or after extra help hours, prepping for the next game he is announcing or just getting some extra work done for his classes. No matter what time or when, he always has a smile on his face.
“Seeing Mr. Bogatz just brightens my day,” says senior Alex Parlato. “He is always in a good mood.”
“I first met Mr. Bogatz teaching summer school during the summer of 1987,” says Wantagh High School Principal Mrs. Breivogel. “When I came to Wantagh a few years later, he was a friendly face who made me feel welcome. In the years that followed I have come to know Bill not only as a wonderful teacher adored by his students, but a true gentleman and one of the most authentic people I have ever known. Mr. Bogatz is smart,dedicated, kind and caring. I will miss him very much!”
“I’ve always found Wantagh to be a utopia, the perfect school, and that has to do with the students and staff,” says Bogatz. “I’ve taught in many other schools, but there is no place like Wantagh.”
Wantagh is a great school and that does have to do with the great teachers, like Mr. Bogatz. We cannot thank him enough for all of his hard work over the years; this place won’t be the same without him.