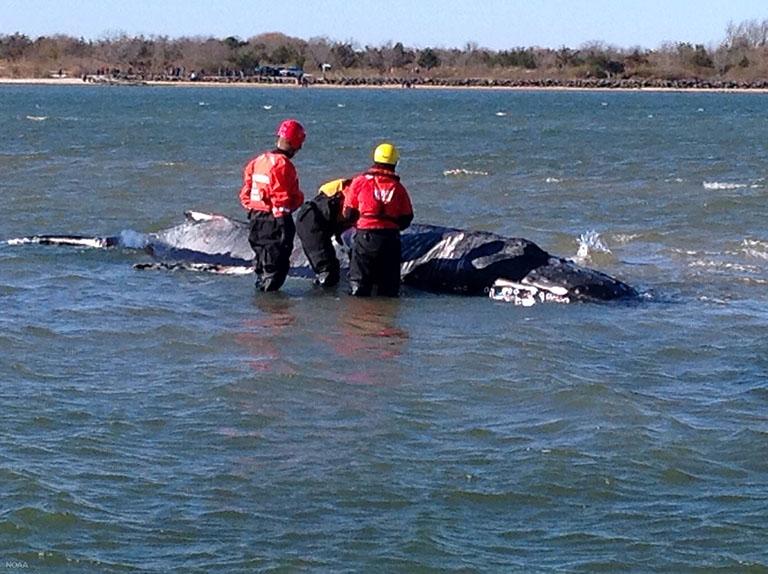 A baby humpback whale was euthanized in Moriches Bay, Long Island, November 23. The whale’s death became a tragedy as hundreds of bystanders watched the young animal’s life come to an end.

The humpback was first sighted on November 20. Authorities reported that the whale was stranded on a sandbar off shore. The cetacean had been spotted in the bay days before and was reported to have been performing normal eating routines and moving throughout the area. Local residents claimed to have heard the humpback crying at night.

The whale’s 20-ton body was immobile for long periods of time, eventually crushing it’s intestines. ABC has reported that the National Oceanic and Atmospheric Administration (NOAA) said they couldn’t physically move the whale because it would cause internal injuries.

Officials observed the scene as the humpback continued to suffer in the bay. Frustrated residents did attempt to help the animal when authorities did not take action. Bringing their boats along with dredges and other equipment, they were turned away by the Coast Guard and police. ABC interviewed Manorville resident, Dave Newins who said, “There are local people who want to help and use their equipment and services and they should work together and get the job done.”

Onlookers watched helplessly from land as National Oceanic and Atmospheric Administration (NOAA) euthanized the whale days after it was trapped. Tears of anger and frustration swept throughout the crowds as they witnessed the innocent animal being laid to rest.

A vigil took place in Westhampton following the humpback’s death to honor the beautiful creature.

The Westhampton Patch reported that a petition has been created to “give local authorities or properly trained citizens to the right supersede the federal government and gain the legal right to provide needed rescue efforts when these federally protected mammals become stranded or beached within locally regulated waters.”