YouTube Personality Stirs Up Controversy During Trip to Japan 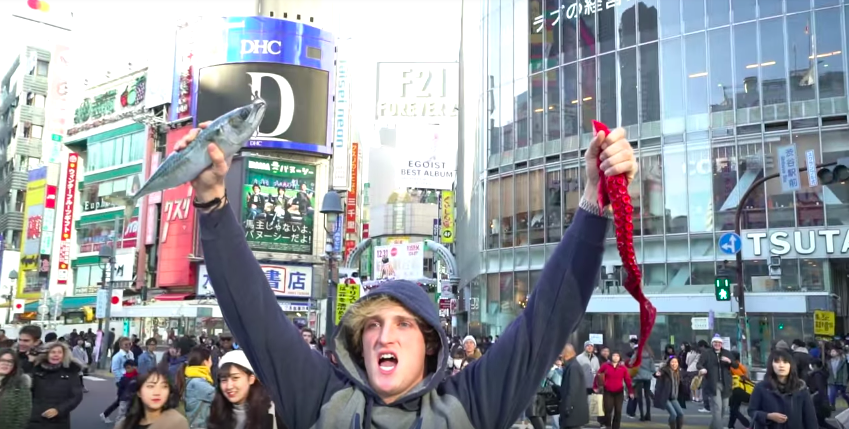 If you’re familiar with YouTube stars you might know Logan Paul. Paul is a 22-year-old man and actor who gained fame originally via posting short, humorous videos to the now-defunct social media platform Vine; after Vine ended its service on January 17, 2017, he migrated to YouTube where he currently runs two channels. One of his channels focuses on short films he starred in, and the other is a daily vlog where he, like many other YouTube stars, takes on silly challenges and chronicles his daily life.

In December 2017 Paul traveled to Japan for a vacation – and one of the stops he decided to visit was the Aokigahara (青木ヶ原) forest near Mount Fuji, known throughout Japan and the world for being home to ghosts of the dead and due to this, becoming an increasingly popular suicide site.

As part of his three-part vlog on Japan, Paul posted a video about his trip to Aokigahara on December 31, 2017, opening with a viewer discretion warning where he claimed the video was the “most real video I’ve ever posted.” The video started out lighthearted in tone at first with a casual explanation of Mount Fuji and the forest, but once Paul actually went into the forest things quickly escalated.

“Bro, did we just find a dead person in the suicide forest?”

Upon encountering the dead person, Paul quickly phoned the police with his entourage shouting vulgar remarks including “Yo, are you alive?” to the body. He later explained that he “came…with an intent to focus on the haunted aspect of the forest” and that suicide, depression, and mental illnesses are not a joke. But afterwards he claimed “This was all going to be a joke, why did it become so real?” while trying to hold in his laughter. The video ends with Paul saying he has “chosen to entertain [his viewers] every single day,” as well as encouraging mentally ill and suicidal people to seek help. Due to the nature of the video, and how Paul basically exploited someone’s suicide, the video has been the source of much controversy among both Paul’s many fans and those who hadn’t even heard of him prior to word getting out about his video.

Paul responded to the Internet backlash he was getting first with an apology letter posted to his Twitter. “Let me start with this — I’m sorry. I didn’t do it for views. I get views. I did it because I thought I could make a positive ripple on the internet, not cause a monsoon of negativity,” wrote Paul. His original intent of posting the video was to increase awareness of suicide, but his rude, disrespectful behavior while filming ended up shadowing his good intentions. Even the apology letter received backlash, with numerous Twitter users being unable to take both the letter and the video seriously due to Paul’s past of creating more lighthearted videos such as pranks and using words such as “self-praising” to describe the apology letter.

His other videos of his trip to Japan also stirred up controversy as his behavior throughout the trip disrespected the culture of Japan. Both Paul’s worldwide fans and the Japanese urged for his channel to be removed from YouTube due to the controversial nature of his videos. The video of his visit to Aokigahara was removed by Paul himself the day after it was uploaded, with other punishments from YouTube following. According to the BBC, “Paul’s channels were removed from YouTube’s Google Preferred programme, where brands sell ads on the platform’s top 5% of content creators” January 11.