Eisenman, LaFaye and Roveto — It’s not a Law Firm 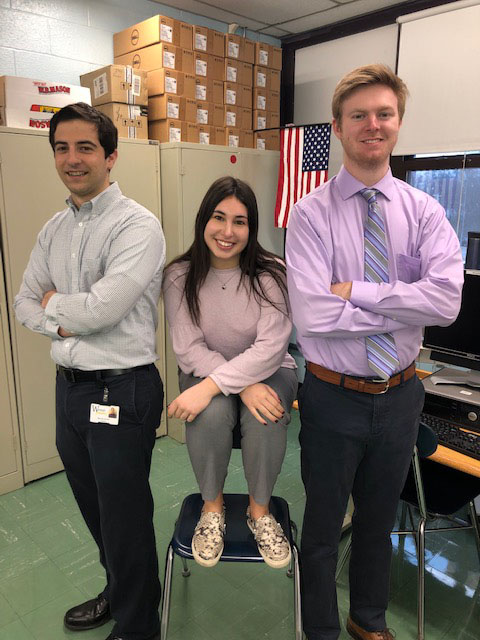 There are three young, fresh faces here at Wantagh High School: Ms. Eisenman, Mr. LaFaye and Mr. Roveto. They are the permanent subs this year. Even though they do not see the same students everyday, they genuinely care about Wantagh students.

Ms. Eisenman is an aspiring English teacher  and University of Delaware graduate. When deciding what subject she wanted to teach, she went for English because “unlike math and science, with English there is no definite answer so you get to be more creative.”

One of her favorite books is “Tuesdays with Morrie,” by Mitch Albom. Besides English, Ms. E also is a big fan of Starbucks. If she isn’t reading a book or drinking some iced coffee, she is probably playing with her 2 golden doodles, Daisy and Doodle. Ms. Eisenman decided to go into teaching because she enjoys helping people and loves when students have that “I get it” moment.

Mr. LaFaye graduated from Hofstra and hopes to become a Social Studies teacher. “I just think it is the most interesting and it really applies to everything in life,” said Mr. LaFaye.

He also thinks that “a little bit of knowledge of history can go a really long way.” He decided to go into teaching because he loves working with young people and mentoring them. Teaching has always “been a dream” of his ever since he was a kid. Mr. LaFaye has not spent a lot of time here at Wantagh, but he already has many positive things to say about the district. One of the things he has noticed about Wantagh is that “the students are awesome and the teachers all really look out for each other, it is a really close-knit community.” Mr. LaFaye really has positive feelings towards teaching at Wantagh, and the feelings toward him are definitely mutual. Also, he may or may not be the real Mr. Apfelbaum.

Mr. Roveto was the replacement for Ms. Gordon when she was on maternity leave. Since Ms. Gordon is back, he is now a permanent sub. He graduated from Plainview-Old Bethpage JFK High School and then earned his undergrad and grad degrees from Adelphi. He hopes to land an Earth Science position. One thing he really enjoys about Wantagh High School is that “we have such a small school that it allows me to better know my co-workers as well as a higher percentage of students than would be possible in a large high school.”