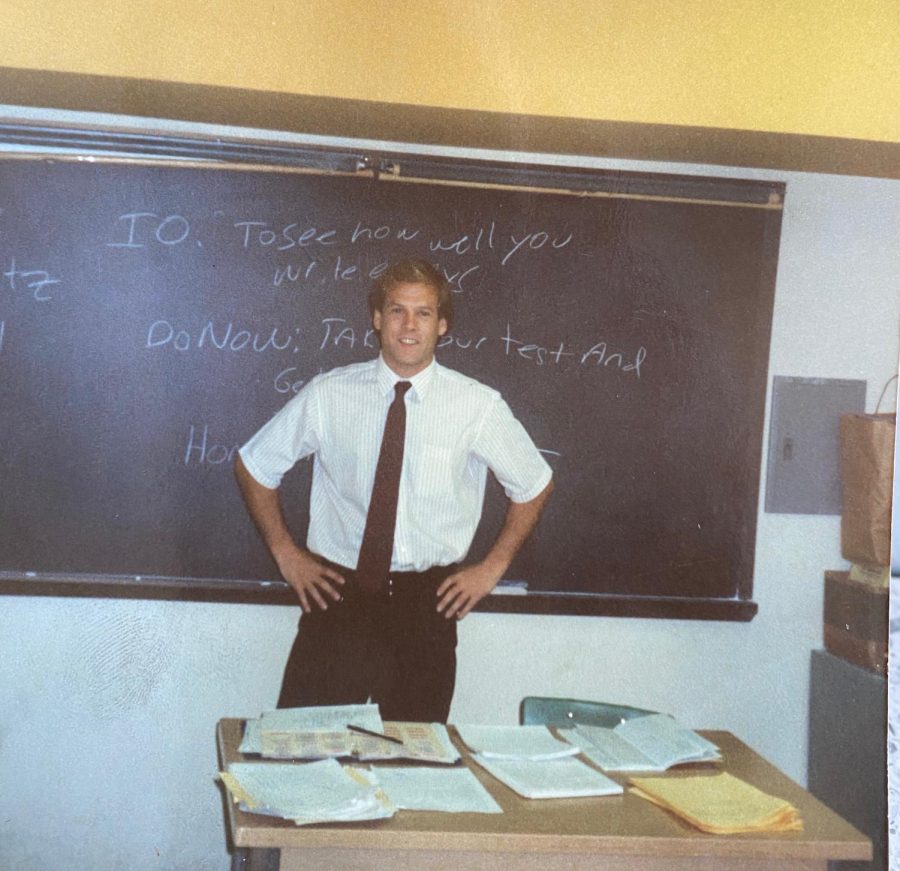 Where do I even begin? It is with great sadness to announce Mr. Kravitz’s retirement from the classroom on July 1. The man who has made The Warrior  possible will close out a 32-year public school teaching career.

“Mr. Kravitz has been the inspiration behind The Warrior for nearly 30 years,” says Wantagh High School Principal Mrs. Breivogel. ”We are so grateful for the time and passion he has put into our high school publication. He has championed our students having a voice and as a result, The Warrior has received numerous accolades and awards for its professional, exceptional reporting. I thank Mr. Kravitz for his dedication and contributions. He has certainly created a legacy in Wantagh High School.”

Mr. Kravitz, 59 years old, has had many roles: Coach, Colleague, Teacher, Friend and of course, the adviser of our school newspaper, The Warrior. His dedication to journalism here at Wantagh will be missed. When an article was required for a print issue he popped in classes, stalking editors and insisting their articles be finished yesterday. He emphasized conciseness, short declarative sentences and original verbs and nouns.

“Hemingway didn’t trust adjectives and adverbs,” he repeatedly told his students. And of course what better way to show them that then to teach Hemingway’s short masterpiece “Hills Like White Elephants.”

Nobody knows Krav as well as his roommate of the past 20 years, fellow English teacher and adventurer, Mr Rafferty.

“Not a day goes by in English room 129 without a medley of student passer-by voices saying “KRAV” as they scuttle by between periods,” says Mr. Rafferty. “Mr. Kravitz has rendered such a fun, social, heartfelt and warm atmosphere. He has been the subtle pillar of the goodness in Wantagh High School. “KRAV” echoes in the hearts of so many lives and certainly, it will remain in mine, encouraging me along the way.”

Another English teaching colleague, Mrs. Magnuson, shared a room with Mr. Kravitz their first year at Wantagh. Mr. Kravitz’s experience helped a much younger Mrs. Magnuson get through the challenges of first-year teaching.

“If it hadn’t been for Pete Kravitz I probably wouldn’t still be a teacher,” said Mrs. Magnuson. “Anytime I felt discouraged, nervous, or inadequate, he would give me a peptalk so that I would believe in myself again.”

Wantagh High School Junior Bianca Falco says, “Krav is one of the best teachers and I’m gonna miss him and his stories.”

“Mr. Kravitz is the kindest and most supportive colleague anyone could ever ask for,” says English teacher Mrs. Nieves. “He is the epitome of a team player, and our English department team is truly going to miss his heart and humor.”

He started teaching in Brooklyn at Boys and Girls High School in 1988. He came over to Wantagh in 1991. He taught English (grades 9,10 and 12), Journalism and Creative Writing. The 2020’s marked his fifth decade as a New York public schools educator.

Former student Chris Eisenhardt said on Facebook, “Four years of journalism with (Krav) made me a better writer and certainly inspired me to teach.”

“Stencel did an amazing job as the NHP newspaper advisor,” said Mr. Kravitz. “For a few years his kids kicked our butts at the Adelphi Press Day journalism contest. But he didn’t last too long as a high school newspaper advisor. It’s a grind, but a rewarding one.”

And while he is also extremely proud of former students who pursued careers in journalism — like News 12’s Erin Colton, Newsday’s Owen O’Brien, Jackie Dresch who worked at NBC News and HBO and Orlando Fox 35 TV reporter Stephanie Buffamonte — he says that pride extends to so many other former students.

“On Facebook I see the courage of former students who are health care workers like nurses Heather Kennedy (nee Cabrera) and Susan Blackmer (nee Bronzino),” said Kravitz. “They are saving lives in this terrible pandemic.”

Mr. Kravitz said that ending his career during the coronavirus pandemic is strange and sad, but his first thoughts are with the well being of the students, colleagues and the community. “Though I don’t miss waking up at 5 a.m. I would rather be in school for the final days of my career,” he said. “But I feel for those who are suffering and mourning the loss of loved ones. Nassau County has the second-most corona cases of any county in the nation next to New York City here in mid April.”

Many students have shown their love and support towards Krav’s retirement like junior Sarah Benkovic, who had him as an English and Journalism teacher. “Through all of the years I have treasured (my moments with) Krav and I’m gonna miss that teddy bear so much,” she said. “Not sure what I’m going to do without him for my last year of high school.”

“I have very mixed feelings about Krav retiring this June,” says Spanish teacher Mr. Espinosa. “I’m really happy that he’s going to get to enjoy his life. He brings such youthful enthusiasm and intensity to each day. It’s awesome working alongside him. I’ll miss the daily banter with him and our friends here at school. As much as I “hate his voice” when he yells out names in senior study hall, it is a part of my day that will be missed. I wish him only the best in his retirement years.”

Mr. Kravitz has coached wrestling and golf here at Wantagh High School. He and Mr. Muzio (current director of guidance) took over the wrestling program in 1991. Had it not been for the two of them, wrestling might have collapsed here. They coached together for eight years and built up the program.

Mr. Muzio continued for another eight years and in his last match as a coach Paul Liguori won a state title — Wantagh’s first in over 35 years. “Mr. Muzio put his life into this wrestling program for 16 years,” said Mr. Kravitz. “Our time together in the ‘90’s were perhaps the best years of my educational career.”

And now the wrestling program is a powerhouse, having dominated Nassau County and New York State for the past decade. Mr. Kravitz always tried to stay connected in a small way to the program by working the scoreboard at meets. And he even returned to the mat this year as a middle school wrestling coach at Clarke, where he had a wrestling renaissance and hopes to coach there next year.

As for golf, Mr. Kravitz and Mr. Colavita have coached the varsity team for the past 11 years, which according to Mr. Kravitz is much more relaxing than coaching wrestling. He hopes to continue coaching golf here post retirement.

A frequent golf partner of Mr. Kravitz is Wantagh H.S. social studies teacher Mr. Tallarine.  “Krav’s passion for journalism and kids’ integrity went unmatched,” said Mr. Tallarine, whose wife Lauren (nee Leonard) was a reporter on Mr. Kravitz’s very first newspaper staff in 1993. She is now the Math Chairperson at Manhasset High School. “I hope all of his shots in retirement hit the greens except when I play with him.”

“Mr Kravitz and I shared a study hall at the beginning of our careers and shared the golf coaching job up to and hopefully beyond his retirement,” says science teacher Mr. Colavita. “I appreciate the way he was always able to handle the things I couldn’t, or didn’t want to.  I don’t know if I’ll ever know a more easy-going, good natured colleague. I wish him all the best and am looking forward to hearing all his retirement stories for years to come.”

To Mr. Kravitz, thank you for inspiring my love of journalism and for being a great role model for the past three years. I never would’ve stayed with the program if it wasn’t for you and now I can’t imagine my life without it.