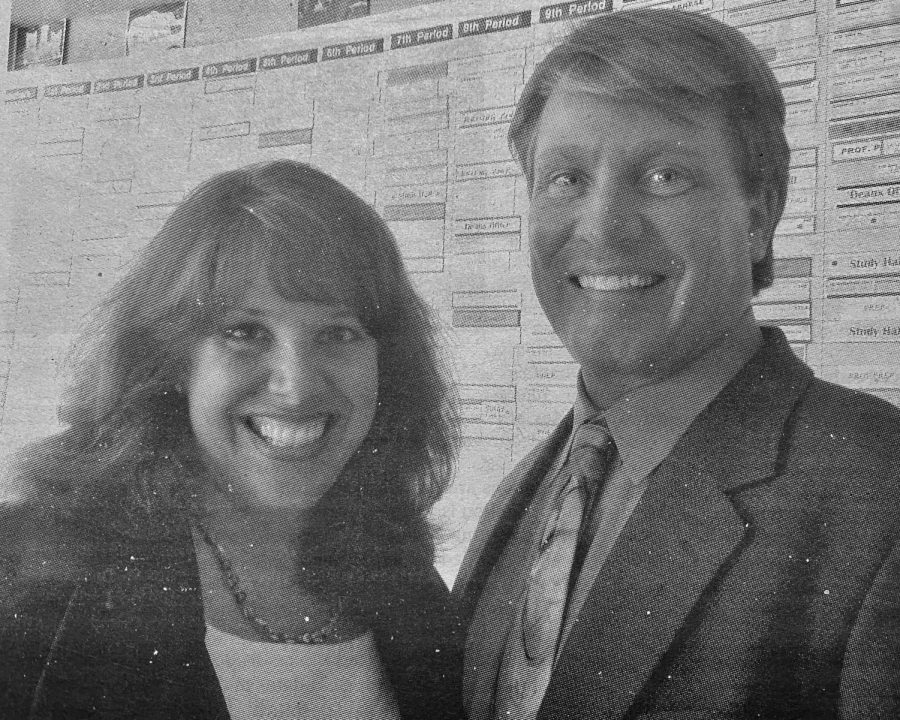 Mrs. Breivogel and Mr. Brown from The Warrior, 2008

Wantagh High School’s administrative dynamic duo will retire together. Mrs. Breivogel and Mr. Brown have worked alongside each other for nearly three decades and have been best of friends since their first Wantagh jobs as guidance counselors in the late 1980’s. Their retirement shocked many students and staff, especially since they announced they would depart together.

Mrs. Breivogel and Mr. Brown took over at Wantagh High School together in the 2008-09 school year, a tough year as the school budget had been voted down and they had to run the high school with limited funds and approve massive fundraising drives.

Nonetheless, Wantagh’s teachers always found them to be positive and upbeat. “The Breivogel/Brown leadership was characterized by compassion and humor,” said English teacher Mrs. Nieves. “Whether it was Hurricane Sandy or a computer hack, they could always be counted on for encouraging support and reassuring smiles.  Throughout our highs and lows, they made it clear, we were always in it together.”

Additionally, Mrs. Breivogel retires as the only female principal in the 65-year history of Wantagh High School and its longest-serving one at 12 years.

For those years she has repeated her words of wisdom to every incoming class at freshmen orientation and beyond: “Your name is your most-prized possession.” When asked what comes to mind when they think of their principal many students recited her quote.

Through all her years at WHS, she says that Mr. Brown has been a wonderful partner. They grew up here together and served the community together.

“It is not surprising that we decided to embark on the next phases of our lives together,” says Mrs. Breivogel. “Besides I cannot imagine having anyone else but him as a fellow leader in WHS.”

Family has always been a priority to her; she has three grown daughters who settled in Atlanta and Orlando. “I am so proud of raising my beautiful daughters and supporting them in their higher education and careers,” she said.

As for how she will spend her time after retirement she said, “Both my husband and I are excited to relocate to be closer to our children and grandchildren. My husband is a retired NYC fireman and he has a list of adventures lined up for us. We have both worked very hard throughout our 32-year marriage and we are looking forward to seeing how all of our hard work has paid off.”

She’s going to miss the community, people, students, teachers and staff greatly. “I have grown up here, in WHS,” she said. “I will be grateful for the lessons I have learned and how I became a better teacher, leader, and friend. I will always be a Warrior.”

She adds, “I hope that I have made a positive impact on my students’ lives over these past 30 years. Although my interactions have changed from the days when I was able to spend wonderful one-on-one time with my students as their guidance counselor, I am happy that I was given the opportunity to serve the high school and create some wonderful programs. I hope as an administrator, I was able to remain student focused and champion their educational programs while helping to provide the best high school experience that will stay with them forever. I am really proud of the character education I contributed to through reminding my students that their name and legacy are so important.”

As for her advice to students: “Live every day to the fullest and give 100 percent in everything you do. This way you will never have any regrets. I also find it fitting that even in this unprecedented time, stay focused and positive and kind.”

Her educational career began in the classroom as she taught English in a different district for three years. She was a Wantagh High School guidance counselor from 1989-2001. Then in 2001 she became assistant principal of the high school.

“Mrs. Breivogel and Mr. Brown added personality to the roles of principal and assistant principal, respectively,” said Director of Guidance Mr. Muzio.  “We solved a lot of problems together over the years, and had some fun doing it.”

Mr. Brown ends his educational career after 33 years. He has been the assistant principal at WHS for 12 years. There is nobody who embodies such a refreshing presence like he does. It is bittersweet that his positive aura won’t be among the WHS black and gold hallways in the next coming years. Mr. Brown’s career timeline is what many teens picture when they idealize their future. He started at the bottom and worked his way up; and the best part: he was able to still continue his passion — music.

Prior to his AP job, he wore a plethora of hats in the education system. At the beginning of his career, he became a guidance intern at Wantagh. Then, in 1988, he did a leave replacement for the orchestra teacher at the time. Following that, he was a permanent sub at WMS, then an elementary school counselor at Seaford Manor Elementary for 1 year. He returned as a WMS guidance counselor for 11 years. Later, he became a WHS guidance counselor for 3 years, which allowed him to rise to the director of guidance and counseling position for Wantagh for 4 years.

Mr. Brown is looking forward to doing more with music and theatre once he retires on July 1. He currently has a part time job as a church singer. So, when he’s not mass scheduling…he’ll be using his tenor vocals.

“I had hoped to get back to directing and/or performing in the theatre which I had done a lot of prior to becoming an administrator,” he said. “Now with the pandemic situation, that is on hold. I also plan to work more in the business that I am a part owner of. It’s a home companionship agency for senior citizens that need help living in their own homes instead of going to nursing homes.”

Mr. Brown has always been generous when it comes to the arts and helping others. Kyra Orgass, a graduating 2020 senior says, “Mr. Brown was always such a genuine person. He helped me so much with my character work for (the play) ‘Rent.’ You can tell he cares since theatre is something he’s so passionate about.”

As for why he and Mrs. Breivogel retired together, he said, “We started at the same time, are almost at the same age…less than a year apart, and both have lots of things we want to do after our careers in education. The timing just felt right.”

“The teacher-administrator relationship is a tricky one,” said English teacher Mr. Kravitz, who is also retiring this year. “Mr. Brown and Mrs. Breivogel were an incredible team, as far as teachers were concerned. They were extremely supportive but did not micro-manage, as many administrators will try to do.”  Social Studies teacher Mr. Tallarine agreed saying that Mr. Brown and Mrs. Breivogel gave teachers autonomy to “teach as we saw fit.”

So many teachers reacted positively to their leadership. “It’s been a pleasure knowing and working with Mr. Brown and Mrs. Breivogel,” said Mr. Colavita, physics teacher and president of the Wantagh teachers’ union. “Their leadership styles and personalities worked so well together. The stories we collected will be passed down for years to come. I’m sure people will think we’re making some of them up. But they’ll remind us of their contribution to this community and how grateful we are for everything they’ve done.”

Both Mr. Brown and Mrs. Breivogel have had many big career accomplishments. What does Mr. Brown see as his most significant one?

“It’s hard to select one accomplishment,” he said. “From an educational standpoint over the past 12 years we have worked hard at increasing the number of AP courses while at the same timekeeping the large number of College Level courses…and making these courses available to as many students as possible, so that they would be better prepared for life after high school. This is very difficult to maintain as we have a relatively small school of 850 students and we offer 22 AP courses and 22 College Level courses. Twelve years ago when we had about 400 more students, we only offered 9 AP courses along with 21 College Level courses. There is no other school as small as we are that offers anywhere near the number of course opportunities for our kids.”

Not only did Mr. Brown boost school morale, he remained determined to provide as many opportunities to the students through his years at WHS. He cared deeply for the students and their education. His main focus was to make WHS a welcoming, comforting, and fun place for students to live and learn.

“I wanted to always be a part of a team of educators who could do that for all students,” he said.

Mr. Brown’s favorite part of his position was threefold. He elaborated: “I love solving big problems and big puzzles…so building the exam schedules and the proctoring schedules as well as the master schedule—including the student and teacher schedules—are like solving a huge gigantic puzzle.”

He also loved the unpredictability of the job. Being an administrator is very different from teaching in that one never knows what any given day is going to present. He enjoys shifting gears and multi-tasking.

“I am a ‘people person’ and went into counseling because I enjoy interacting with and helping students,” he said. “Being around thousands of kids for over three decades in the same workplace has afforded me the opportunity to work with some of the best students and their families and wonderful colleagues. I will miss that part the most.”

About 60% of his life was spent in the Wantagh school system. He started his career at the age of 23 and will be turning 56 soon. Over the course of those years, he has learned and evolved.

“My advice is not much different than what I have given for many years,” he said. “First  stay in the moment.  Second, before speaking or taking action ask yourself if what you are about to say or do is the right thing, the kind thing and the fair/equitable thing and last, remember that 90% of what we worry about doesn’t happen, 9% happens but to a much lesser degree than we feared, and in those 1% moments when things are as bad as you imagined, you are not alone…there are always people to help you.”

He’s blessed that his parents are still healthy, in their mid 80’s, and they’re only 10 minutes from him. After retirement, he plans on being more available to his extended family, which includes his 4 sisters. He jokes, “Of course my 4 dogs are going to be very happy that I am around a lot more too!”

Mrs. Breivogel and Mr. Brown created a welcoming environment for the faculty and students of WHS. For the Class of 2020, this amazing administrative duo has been our most-prized possession.