Wantagh Falls to Garden City in the Conference II Championship 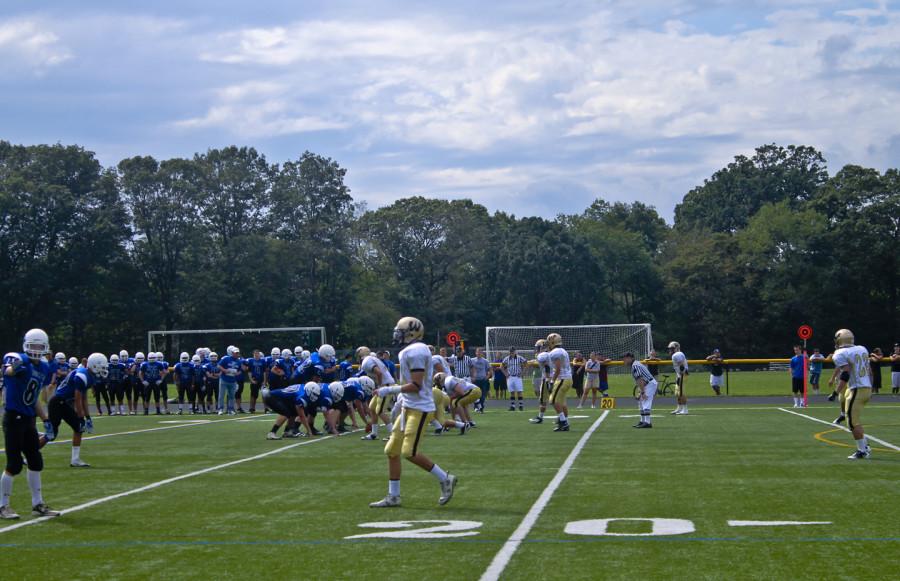 Under new leadership, the Wantagh Varsity Football Team earned its ticket to Hofstra for the Nassau County Conference II championship.

After 20 very successful years under Coach Keith Sachs, the Warriors have continued their playoff tradition under head coach Tom Casey. Casey, a 30-year coaching veteran, most recently was the offensive line and strength conditioning coach at Seaford High School. He coached football for many years at Garden City.

Wantagh took on Garden City November 18. It marked the third straight time the teams have met in the playoffs. Garden City won the previous two playoff match ups – a win the championship two years ago and a playoff semifinal win last year – and it was once again victorious with a 35-7 victory.

The Warriors have filled some pretty big shoes…or cleats, as standouts Mike Scully, and John Reicherter have graduated. Scully now plays colliegate football at East Stroudsburg University (Pennsylvania). Coach Casey also had some shoes to fill, and it seems the chemistry between coach and team has been remarkable – considering that the Warriors finished 7-1 in the regular season.

Senior captain Nick Mullen leads his team as a star quarterback. He is assisted two other captains: senior Cody Cornacchio, linebacker and tight-end, and senior Christian Labenberg, guard. Mullen says it was strange to play for different coaches this year after playing his whole career for Mr. Sachs. He wouldn’t negatively describe the change, however. He said Casey leads the team and keeps it in high spirits, and they’ve had a great season.

Senior Greg Welch, Number 42, had ended his football career in 8th grade, after breaking his back. As a senior, he decided it was time to get back on the field, with an Long Island Champship in mind. Welch was on the field for 8 minutes total. He broke his fibula in his first game and was for the season.

Welch has been at every single practice and game. He’s done that to support the boys he had played with for years, a team that was close enough to be considered a family.

For this reason, the captains and coach decided to name Greg Welch an honorary captain for the game against New Hyde Park. In the huddle before the game, Captain Nick Mullen informed the team that this dedicated athlete was their motivation for winning the game – and they did.

“I’ve never been a part of a team that has been so close and cared so much about the game and their teammates before,” said Welch close to tears, “It was an honor to be named a captain and watch the boys win that one and become even closer to the Long Island Championship. It has been an amazing senior year even off the field, supporting my team.”

At the New Hyde Park game, senior Brian VonBargen played his last home game, along with the rest of the seniors. VonBargen ran for one touchdown, caught 3 TD passes from Mullen.  Wantagh won 40-7 , crushing New Hyde Park, and securing their spot on the field at Hofstra last Thursday, November 11 in the Conference II semifinals.

Last season, Carey handed Wantagh its first loss of the season. This year, Wantagh came out on top in a 17-16 overtime win over the Seahawks. After this game, junior Gerard Roche was named Defensive Player of the Week by MSG Varsity for his outstanding performance.

Wantagh defeated a feisty Elmont squad 14-6 in the conference semis on a gutsy fourth quarter, 76-yard drive behind the running of Brian VonBargen and Matt Balzano. VonBargen ran the ball in from the six for the go-ahead score and Balzano ran in the conversion.

“The goal from the beginning of the season was an LI Championship, all the seniors and underclassmen want nothing more than that,” said Joe Giardina, running back, defensive back, long snapper, and senior, “I couldn’t ask for a better team to have played with my senior year.” Giardina was named All-County this year.

The offensive line has done a great job this season. Enabling the backs to gain so many yards are: Labenberg, Anthony Consoli, Vinny Costagliola, Ryan Nealon and Steve English. Standouts on defense have been sophomore Pete Brasile, one of the team’s leading tacklers, linebacker Shaun Charkowick, and linemen Russell Greaker and Frank Proscia. Special teams have been led by kicker Andrew Martorella, who has done a great job on extra points and field goals.