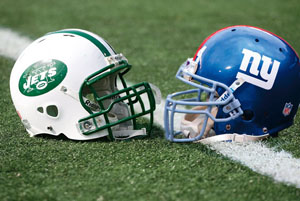 The Giants’ loss to the Washington Redskins in Week 15 made their playoff conquest seem distant. Then a miracle took place. The Giants defeated the Jets and then beat the Cowboys to clinch the NFC East. Big Blue then annihilated Atlanta and proceeded to shock the world of football by obliterating the defending Super Bowl champions on the frozen tundra of Lambeau Field in Green Bay. After this huge upset over Green Bay, the Giants went on to defeat the San Francisco 49ers in the NFC Championship 20-17 in overtime to create the rematch of the decade between New York and New England in Super Bowl XLVI.

So, after defeating the Dallas Cowboys 31-14 in the last game of the regular season, the Giants broke their three year streak of disappointment. Despite the Big Blue’s season looking gloomy during the offseason with the loss of star players Kevin Boss, Steve Smith, and Rich Seubert, the Giants have shocked fans by playing their best season in years. The loss of wide receiver Steve Smith led to the breakout of Vic tor Cruz. The rookie from Jersey was injured in a preseason game last season, delaying his stardom. Cruz’s performance this season has shown no lack in effort, as Cruz tied the NFL record for longest touchdown reception with a 99-yard catch which assisted the Giants in defeating the Jets 29-14 in Week 16.

While the Giants’ season is satisfyingly not as “blue” as everyone expected, it seems the grass isn’t always “greener” in New York. The New York Jets, who made it to the AFC Championship twice the previous two seasons (the 2009 season being the first time they reached that level of the playoffs since 1998), disappointed Gang Green fans with a below-average season. Fingers have been pointed between players on who exactly the fault lies on for their worst season since 2007. Jets backup quarterback Greg McElroy blamed the team’s performance on “selfish players.” McElroy claimed that players were more worried about their own performances than winning. “It’s the first time I’ve ever been around extremely selfish individuals,” McElroy declared on a radio station in Alabama. Rex Ryan partially agreed, saying “I don’t think we were as close as a football team as we were the first two years and now we’re sitting on the outside looking in.”

No matter which team you are a fan of, it’s certain that both of their performances shocked football fans across the nation. Hopefully us Big Blue fans will see another Super Bowl victory, while Gang Green fans hope to see a better attempt by the Jets next season..