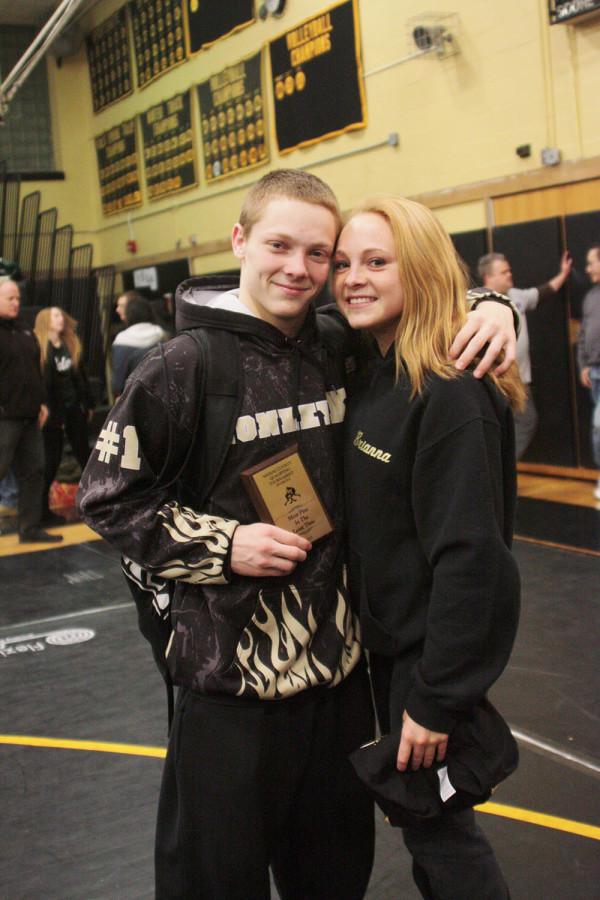 When was the last time a brother and sister were individual county champs in the same season? Senior all-around gymnast Brianna Quinn and her younger brother, sophomore 106-pound wrestler Kyle, both captured Nassau county individual titles this winter in their respective sports. Not to mention, both won in dominant fashion.
Kyle established himself as the undisputed top 106-pounder in Nassau by defeating Chris Donnelly of Island Trees 12-1 in the final. He’s now on his way to the state tournament Feburary 22-23 in Albany. His loudest fan was, of course, his sister Brianna who was seen running across the floor at the Mack Center at Hofstra University to give Kyle a hug just moments after the big victory. She too is headed to the states at Smithtown East, March 2.
“My brother and I really appreciate how much our parents take us around to practice, year round,” said Brianna Quinn.
“Brianna and Kyle, they are so focused and worked so hard to both be No. 1 together,” said Sharon Quinn, the mom of the champion siblings. “We weren’t sure Brianna was going to see Kyle wrestle because she was at her team counties, but as Kyle shook his opponents hand, I heard Brianna from the Hofstra entrance, yelling, ‘Let’s do this Kyle.’ And you just knew Kyle heard her and knew she was there to see him win it big!”
Like her brother, Brianna won her title by a wide margin over second place finisher Jessica Lopez of Plainview JFK High School. Brianna Quinn said that her brother made his own singlet for the finals. It said “Monkey King.” It was gold and black. And it was good luck for Kyle Quinn so his coaches approved of it. The four Wantagh wrestlers wore three different singlets for the finals.
Meanwhile, Brianna Quinn continues her training four hours a day, five days a week. Kyle Quinn continues his grueling workouts, 3.5 hours a day, six days a week.