Baskets for a Cure: An Alzheimer’s Fundraiser 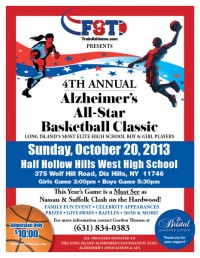 A lot of us know someone who has succumbed to or who is dealing with the Alzheimer’s. Alzheimer’s is something no one should have to deal with. Even knowing the disease’s terror, many teens don’t pay attention to it. Did you know that Alzheimer’s is the sixth leading cause of death in the United States? There has to be a change to make more awareness to Alzheimer’s. The unaffected think that it’s only memory loss, but there’s so much more to it. I was able to have an experience that I’ll never forget at the Bristal Assisted Living in East Meadow.

I was lucky enough to participate in the 4th Annual Nassau vs. Suffolk All-Star Basketball game this fall. Before the charity game, there were a number of events we participated in. The week before the game all of the players met for a dinner at Bristal Assisted Living. We weren’t sure what to expect from the assisted living home. But the people of Bristal had a surprise for us.

All of the players experienced tests with simulations that showed how it feels to have Alzheimer’s. The test I had to take not only took away almost all of my sight, senses on my hands, but also spikes were added to the bottom of our feet to show how it feels to have arthritis. And we had to put on headphones that sounded like a broken radio. This represented what the average Alzheimer’s victim hears in his head 24/7. I felt like I was going insane hearing all the stuff in the headphones. It’s something I can’t even describe. I felt useless and all the tasks I normally found easy took me a very long time. I’ve never been so frustrated in my life. After this experience I will never look at those suffering with Alzheimer’s the same. There has to be something to help these people. Can you imagine dying in a home not remembering your whole life, and not evening knowing you are dying? We need to spread the real deal with this disease and create more involvement!

All of the administrators involved were so inspirational. The founder of the organization is Gordon Thomas. He unfortunately lost his dad to the disease and instead of feeling sorry for himself he wanted to learn more about the disease and help to fight it. Of course, money is an issue for all research. So since he was a former D1 player at St. Johns, he thought it would be great to tie that into something he loved and something he felt passionately about for a great cause.

So he started the fundraising game. The gym is always packed in with admission being $10 along with food, drinks, souvenirs, and the game being taped, it raised a lot of money. Even though both the girls and boys Nassau teams lost by a point, it was a great cause in the end was an honor to be a part of it. It’s amazing what people can achieve when they set their mind to it! One day with hard work and dedication it could be you!