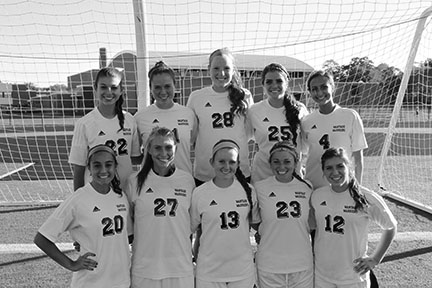 With an overall record of 7-7-2 , the girls’ soccer team had a successful season. Though the girls lost a heartbreaking home quarterfinal playoff game to Bellmore JFK, 1-0, the team’s leadership and drive resulted in a number of thrilling victories. By winning its conference in 2012, the girls moved up into the A-1 conference.

Though the season started slowly, the team came on to earn the No. 4 seed in the county and a first-round home playoff game versus West Hempstead, in which Wantagh won 2-1 on a goal by Jordan Klapper off a feed from Nikki Sliwak. The first goal was scored by Melissa Horn.

“The second half of the season the team really hit its stride,” said Coach James Polo. “Although the season ended abruptly, the girls became a team. We put team above self.”

A highlight for Wantagh was a 1-0 victory over this year’s Nassau County and Long Island Class A Champ, Garden City. With the help of Amanda Profera’s goal and Tori Flaherty’s defense, the Warriors stunned the heavily favored Trojans. With only seconds left in the game the GC had a clear shot at the goal and Flaherty blocked the shot. The Warriors lost to Garden City 2-0 in their first clash.

Unfortunately Profera, one of the team’s top scorers, was injured and missed the end of the season and the playoffs. She had four goals prior to her injury. Klapper led the team in scoring with five goals and five assists. Brenna Connolly had five goals. Other key offensive players were Sliwak, Darcie Smith, Horn and Shannon Kingston. On the defensive side, goalie Kellie Cronley had 143 saves, and Tori Flaherty helped the team tremendously on defense.