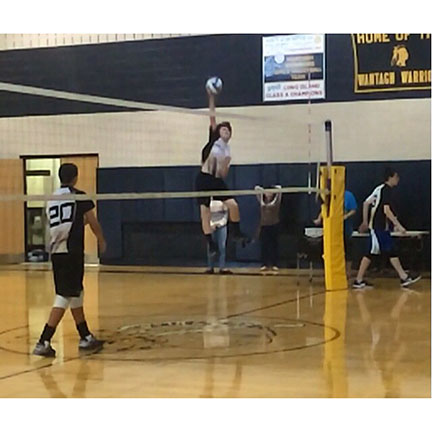 The boys’ varsity volleyball team finished their regular season with an 11-5 record, placing third in Conference BII. The team of 17 boys, 13 of whom are seniors, finished the season strong.

Junior outside hitter, Jake Sinacori, said the team, “Worked well because we were so close. We formed a brotherhood which made the team so successful.”

Senior outside hitter, Steve Becker, described the team as a “family where everyone is there to pick each other up.”

The team was coached by Ms. Fugazzi, who founded Wantagh’s boys’ volleyball team in 1993. Fuggazzi is one of the only female boys’ volleyball coaches in Nassau County. Out of her 23 seasons, Coach Fugazzi describes this team as “one of the most cohesive. The boys are friends off of the court so we didn’t need to work on team building, only fundamentals.”

“Everything I know is because of Ms. Fugazzi,” Becker says. “She really helps the entire team to be their best.”

“We’re looking toward the playoffs, to really surprising the other teams and showing them what we’re made of,” says Coach Fugazzi.