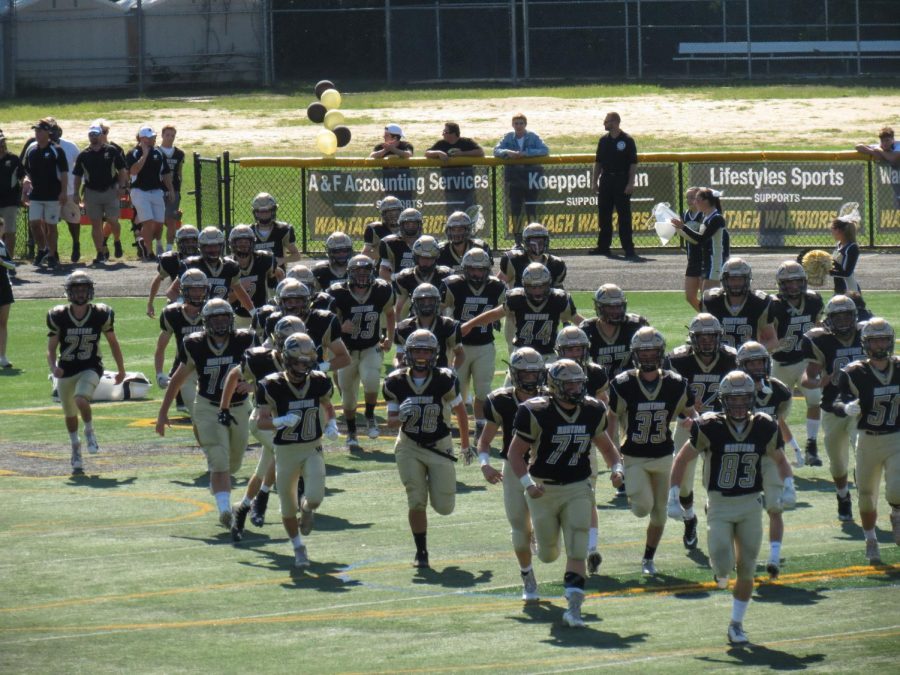 Once again, despite great expectations, Wantagh fell to Lawrence, this time by a 19-6 score. During this game, Wantagh lost its starting running back Michael Lombardi, for the season, after he’d rushed for 140 yards in that game. Although this was a tough loss, Head Coach Keith Sachs said, “It was a positive game. We played with the defending champions rather well, considering all of the mistakes we made. It gave us confidence going forward.”

Add in the challenging transition of a new quarterback in junior Peter DelGais, after two years of Jack Castellano in that role, and there was some cause for concern.

However, the team bounced back with a big 28-20 victory against Valley Stream North, rushing for a combined 300 yards as a team in that game. Since this big win, the Warriors have gone 7-2, including the first round playoff win against Bethpage.

Young players have been a big part of this team’s resurgence this season. Junior running back, Nick Teresky, is ninth in the county in rushing, with 959 yards and 9 touchdowns. He is also No. 2 in the county with 4 interceptions on defense. Also, junior Tom Von Bargen is fifth in interceptions with 3. These two also combined for 3 touchdown runs in the first playoff game. Junior quarterback DelGais, has had his fair share of success, with 411 passing yards, and two touchdown passes this season.

It hasn’t just been the underclassmen stepping into big roles this season, seniors like Dylan Scott, Will DiMatteo, Kyle Graham, and Sam Sloves have taken leadership roles this season as captains. Scott and DiMatteo run the defense, Sloves makes big time plays, such as forcing a fumble on a two-point conversion to save the game against Valley Stream North. Graham is a big target on the offense, as well as, averaging almost one sack per game on defense. Scott had a game to remember against Hewlett, with 12 tackles on defense, and 73 rushing yards on offense.

The biggest highlight of the season thus far has been the redeeming playoff victory against Bethpage. Earlier in the season, the Warriors suffered a 14-7 loss to the Eagles under the lights on a Friday night. Wantagh worked hard all season to get another shot at this Bethpage team, and they did not disappoint, with a convincing 31-7 victory to advance to the Nassau Class III semis. There Wantagh routed South Side, 34-7, behind three Von Bargen TDs, November 10, under the lights at Hofstra University. Coach Sachs said the players were confident going into that game. The Warriors had also overrun South Side 42-7 in the final regular season game. The county championship game will be Wantagh vs. Plainedge at Hofstra, November 16.

So, it’s yet another great season for Wantagh, as the players answered the questions coming into the season regarding leadership roles, performances, talent, and team chemistry. The coaching staff of Head Coach Sachs, and assistants Tony Carter and Jim Morrow are proud of what the boys have proven on the field. Warrior Nation was loose and cheering loud-and-proud for the football team at Hofstra University and they get at least one more chance to root on the boys.